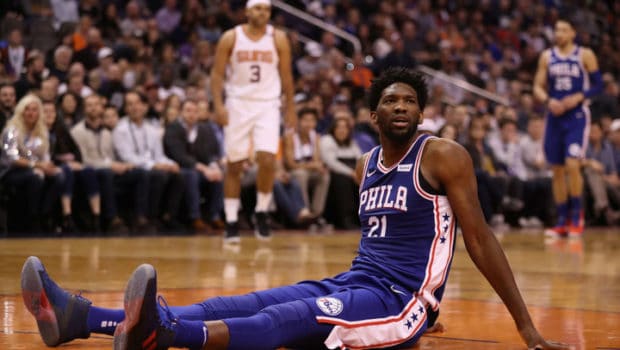 SIXERS JOJO OUT TONIGHT FOR ROCKETS: WILL HE EVER PLAY AGAIN?

The Sixers have adopted a CIA-like silence about injured center Joel Embiid.

He is listed as out with left knee soreness on the NBA’s official injury report for the Sixers’ game tonight against the Rockets, meaning he’ll miss the team’s first eight games after the All-Star break.

The Sixers are 4-3 since Embiid has been sidelined, including a painful collapse Wednesday night in Chicago.

Again, Embiid will miss an opportunity to square off in a national televised matchup against one of the NBA’s best players in James Harden. Their meeting on Jan. 21 was highly entertaining. The two each picked up technical fouls in one contentious second-quarter sequence, and Embiid memorably stared down Harden at one point after coming from behind to block his shot.

If you take Embiid at his word, there’s still no reason to be concerned about his injury. He emphasized Saturday that his absence is about prioritizing “long-term preservation” and, when pressed, said he expected to be back “by next week.”

Still, a ninth straight game missed for Embiid would warrant some worry. With the Sixers set to play the Pacers on Sunday at Wells Fargo Center, you’d think Embiid should suit up for that game if there are no lingering problems with his knee. Though the Sixers should eventually jump ahead of the Victor Oladipo-less Pacers in the standings, they’re still a half-game behind Indiana for the third seed in the Eastern Conference.

The team has yet to provide an official update on Boban Marjanovic after announcing on Feb. 26 that he was diagnosed with a bone bruise and mild sprain of the right knee and would be re-evaluated in 5-7 days. He remains out for Friday’s game.

The combination of Amir Johnson, Jonah Bolden and Mike Scott at center has helped the Sixers tread water without Embiid and Marjanovic, but Brett Brown has struggled scrapping together lineups that can protect the rim. He’s often valued stretching the floor with smaller lineups over interior defense, largely out of necessity.