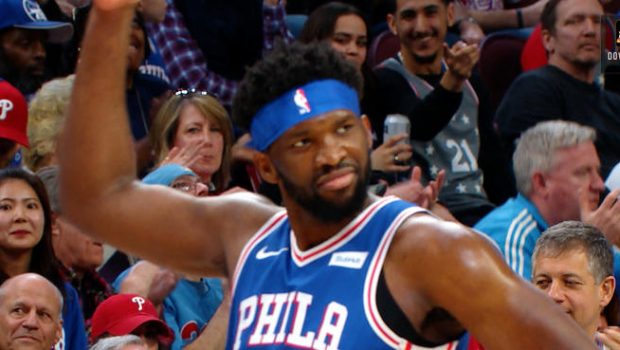 SIXERS JOJO EMBIID OUT 3 GAMES: WTF’S UP WITH THAT?!

The Sixers already had said Embiid would miss the Wolves matchup, but Brown said yesterday that Embiid also will miss Monday’s game at the Dallas Mavericks and Wednesday’s contest at the Atlanta Hawks as part of a predetermined plan to rest the All-Star big man down the stretch.

Brown said the team will re-evaluate Embiid’s status before Thursday’s home game against the Milwaukee Bucks.

Asked about Embiid sitting out with the playoffs around the corner, Brown said it “isn’t ideal” but it also is the right move to ensure Embiid is healthy for the postseason.

“In a perfect world, you’d have all these guys together and playing, and playing a lot, you know, growing in relation to familiarity and so on,” Brown said before the Sixers beat the Wolves 118-109.

“You can go this way or that way. The way that we have chosen to go is the wisest of our options. I’m sure of that.”

Embiid has missed time since the All-Star break because of soreness in his left knee, but Brown emphasized that the decision to rest him was just “load management.” The coach added that the team isn’t concerned that Embiid’s health will be an issue in the playoffs.

“This is not sort of a reaction to symptoms,” Brown said. “It’s just load management. Again, we’re just trying to be smart and deliver him to play in the playoffs ready to go.”