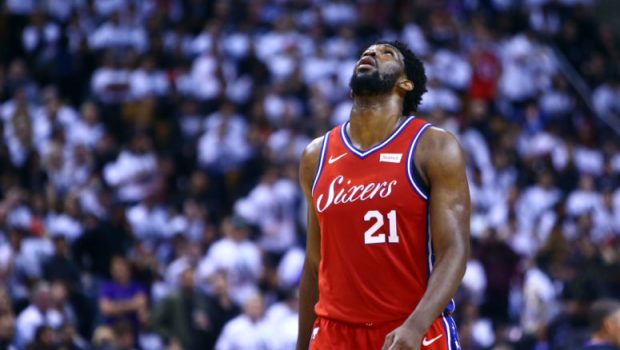 SIXERS JOJO ON GUT-WRENCHING LOSS: ‘IT JUST SUCKS … NO, I’M NOT TIRED!’

“Losing the game that way,” Joel Embiid said. “Last shot. After a hard-fought game, I feel like we had a chance. A lot of things go through your mind. And it sucks. I don’t know. I can’t explain it. It just sucks.”

That was the Sixers star center’s reaction to losing on a last-second-clock-beating shot by the Raptors Kawhi Leonard that Embiid took a shot at spiking.

Before making his way to the locker room, Embiid shared an embrace with Raptors center Marc Gasol, who offered a few words of encouragement between hearty sobs by the 25-year-old center, who is the Sixers franchise.

“He was just telling me … tried to let me know that I’ll be right there at this moment and even further in my career,” Embiid said, praising the class that Gasol displayed.

Three of the Sixers’ starters — Jimmy Butler, Tobias Harris and JJ Redick — are headed toward free agency. The Sixers’ coach, Brett Brown, while under contract, will have to answer to the expectations laid out by Sixers co-owner Josh Harris in March.

“We want to make sure at a minimum to advance deeper in the playoffs than we did last year,” Harris said at the MIT/Sloan Analytics Conference in March, adding that he would be “unhappy” if that weren’t the case.

“I think the group incrementally, as I said in the beginning before we played, has slowly come together,” Brown said. “I think our starting group is as talented as any in the NBA. … I think moving forward, you try to hold on to as much of it as you can. And it’s not my area. [General manager] Elton [Brand] will be great at this, and I’m sure a large portion of the challenge and the planning will be how do you grow the bench and hold on to as much of the starters as you can.”

Brown was asked directly about his job security.

“Stuff like that, we’ve talked internally a lot,” Brown said. “The club can respond to that.”

Philly’s starting five, heralded as one of the best collections of talent in the sport, has still played only 21 games together in the regular season and playoffs combined. In that time, the 76ers found themselves one possession away from a berth in the Eastern Conference finals.

“We haven’t been together for a while with this group,” Ben Simmons said. “There is a lot of potential. The guys that we have, everyone we have now, we grew a lot in the last few months of being together. I’m proud of my guys.”

When asked what the Sixers learned from the Raptors, Simmons didn’t mince words. “It’s simple,” he said. “You just got to get better.”

“I’m not worried about none of that right now,” Butler said when free agency came up during the postgame news conference. “I just got done losing. I don’t want to talk about nothing else except for basketball.”

Embiid, who pushed himself to play through left knee tendinitis, a bout of gastroenteritis and an upper respiratory infection during the postseason, was an injured first-year player in 2015-16, when Philadelphia went 10-72 as it played out its controversial rebuild known as “The Process” that was introduced by former general manager Sam Hinkie.

Embiid embodied the turnaround, even adopting “The Process” as his self-appointed nickname.

Addressing the media postgame, with an offseason rife with uncertainty ahead of him and years of bad basketball behind him, he was asked where “The Process” stands now and how exhausted he felt after playing all but 2 minutes, 48 seconds of the 48 minutes played Sunday.