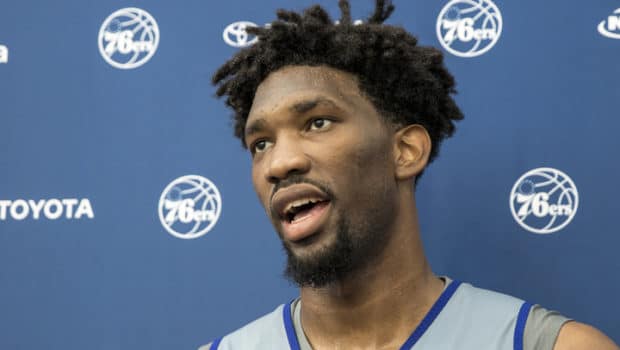 SIXERS’ JOJO EMBIID MISSES PRACTICE WITH ANKLE, BACK TODAY TO PREP FOR OPENER!

But he is expected back today and for Wednesday night tip-off of the regular season in DC.

“I still have to work on a lot of stuff,” Embiid told Sixers.com. “I just got to build on the [things] that [coaches are] going to need me to, be the best player I can be, and the leader that they want me to.”

Embiid thought his defense could use some fine-tuning.

“I respect how critical he is of himself,” coach Brett Brown said last week. “Positionally, he’s fine. I’m always challenging our bigs to be more vocal. The game is so fast, there’s multiple pick and rolls.”

On the whole, Brown felt Embiid has performed well.

“Given what he’s been through, I think he’s exceeded my expectations,” Brown said Friday. “We’ll all make better judgement of how far along is he really when you really plan an NBA game. To-date, he’s taken the opportunities he’s had, made the most of them, he’s put in work. He’s been a complete pro with trying to learn and get his body and his cardio right under the guidelines that have been given to him.”

“It was good to get out there,” said Embiid. “I felt good out there. Everything is fine, and I’m happy, excited about the season.”