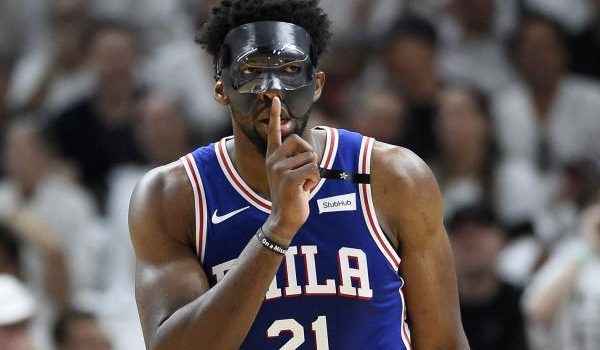 Coach Brett Brown and center Joel Embiid provided the drama yesterday as the Sixers contemplated playing the Heat with or without the second-year star who hadn’t played since March 28 because of a concussion and fractured orbital bone.

And then they played the game, which left Heat fans at American Airlines Arena muttering:

Who was that masked man!

Embiid led the Sixers to a 128-108 win over the Heat and a 2-1 lead in the first round Eastern Conference playoff series. He scored a team-high 23 points, hitting 3-of-4 shots from 3-point range and had seven rebounds, four assists and three blocks.

Embiid played the game in a protective mask due to his orbital bone fracture. It was his first playoff game.

“I am proud of what [Embiid] did on the court and the professionalism he showed,” Brown said. “Not only was he injured, but he had to play in a playoff game on the road in a mask. It’s not like there is a clear vision line out of the mask. It has a protective lens in there as well. For him to come back under those terms and produce, I am very proud of him.”

Goran Dragic led the Heat with 23 points and eight assists. Ben Simmons had 19 points, 12 rebounds, seven assists and four steals in the victory.

“I love blowing teams out,” Embiid said. “I like that we did that. We aren’t here to make friends.”

One of Embiid’s most entertaining plays occurred in the first minute of the fourth quarter. Heat forward Justise Winslow ran into the paint to defend the 7-foot Embiid. Embiid faked out one defender, but when he went up for the score, Winslow blocked him with both hands. Winslow fell to the floor and taunted Embiid after the defensive gem. The Heat forward then received the ball on the offensive end. He went up for a fadeaway shot, but was rejected by Embiid.

“It felt great,” Embiid said. “When he blocked me, I didn’t really see him. Good for him. At the other end, I’m glad I got him back and kinda shut him up a little bit because he was talking big time when he did block me.”

“You don’t really want to talk trash to me. I’m glad I got him back.”

Winslow said that seeing Embiid in the game made it “different.”

“He’s a focal point of their offense and he causes a lot of mismatches,” Winslow said. “At the same time, Ben is still doing what he’s doing. He’s still causing problems, finding shooters, running transition. It’s definitely a different look when you have an All-Star back in the lineup. It changes things, for sure.”

The Heat started out the game up 4-0, before the Sixers mounted a comeback behind Marco Belinelli and Robert Covington. Belinelli scored 11 points in the frame, while Covington netted seven points. Philly and Miami would change the lead seven times in the opening quarter, before the Heat escaped with a 37-33 lead. Winslow scored 10 points in the first period.

The Sixers exploded in the fourth quarter, putting what was once a close game into a blowout. The Sixers shot 52 percent in the frame, while holding the Heat to 26 percent from the floor. Philly outscored Miami 32-14 over the final 12 minutes.

Game 4 of the series tips off at 2:30 p.m. tomorrow at American Airlines Arena.