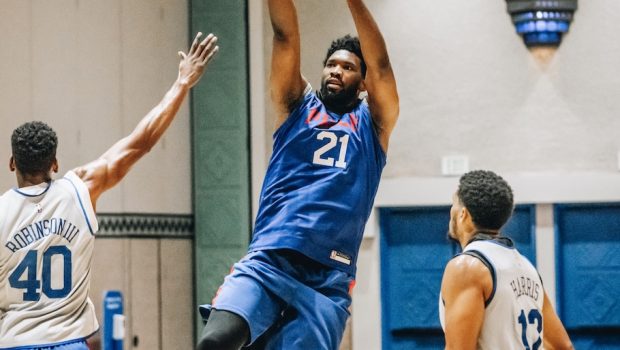 SIXERS JOJO IN THE BUBBLE: HEALTHY AND HUNGRY FOR A TROPHY!

”All I want is to stay healthy, stay safe, keep the people around me safe,” Sixers All-Star center Joel Embiid told the AP. ”I want to be sure that I can live for a long time and not have any sort of, I don’t know, consequences for the future.”

Jojo Embiid is taking no chances.

He even arrived for the team flight to Florida in what appeared to be a full hazmat suit.

Embiid wants to return happy, healthy and hoisting a trophy.

”I feel like we have a great chance of winning a championship,” he said.

The Sixers felt that way for the last three season. This one unraveled as Embiid and fellow All-Star Ben Simmons battled injuries. Free agent signee Al Horford seemed out of place from the start, even moved out of the starting lineup as he struggled. Brett Brown appeared to be coaching for his job when the NBA suspended the season on March 11. At 39-26 the Sixers were a lock for the playoffs. But as a title contender, they were on the bubble well before they entered one to resume the eight-game season for seeding Aug. 1 against Indiana.

But there is reason for optimism.

Embiid has had months to recover from surgery on his left hand and shoulder and spent the break working his way into what the Sixers believe is the best shape of his career. The 24-year-old Simmons, the NBA’s leader in steals, said his nagging back injury has gone away and he’s ready to roll. Simmons will open the break at power forward and Shake Milton gets the run at point. Brown tried it in the 2019 postseason when he let former Sixer Jimmy Butler run the offense. Simmons could still end up as a point-forward hybrid and have the ball in his hands plenty — just don’t expect him to shoot many 3s.

Brown said the Sixers are ”built for the playoffs.”

”I felt everything was pointing to us landing the plane, getting good health and letting that environment be Judgment Day,” Brown said. ”I feel very confident, and respectfully cocky, that we’ve done good work.”

All the Sixers say they are ready and need the ramp-up period to adjust to a slightly new starting lineup. Milton, Josh Richardson, Tobias Harris, Simmons and Embiid are expected to get the call for the restart. Embiid missed 21 games this season and Richardson 17 to — combined with Simmons’ late-season absences — made the Sixers as injury-prone as any playoff team in the league. Stay healthy, and the Sixers could be scary.