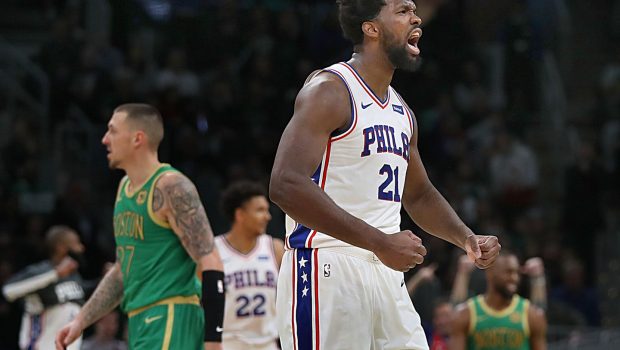 SIXERS JOJO IFFY FOR CELTS THURSDAY: ‘I WANT TO PLAY, A BIG GAME’!

Joel Embiid’s dislocated ring finger on his left hand makes him questionable for tomorrow night’s showdown against Eastern Conference Boston at the Wells.

“That’s a possibility,” Embiid said when asked if he could miss the game. “I want to play. It’s a big game. Last time we played them we had great success, but at the end of the day whatever they want me to do. Obviously I’ll try to fight it, but they care about me so whatever they want to do … We’ll see.”

Embiid added: “They [medical staff] were just talking about the ligament. They’re still figuring out what’s next.”

“It was pretty bad,” Embiid continued. “I basically could only play with one hand. It was really bad. But in the midst of the losing streak I just wanted to make sure that I do everything possible to get us a win, and I was glad to get us a win.

“The consequences, you assume them later, but as the leader I wanted to go out and show your team-mates that you want to win and you’re going to do whatever possible to do so.”

76ers head coach Brett Brown hailed Embiid for returning to the court after sustaining the injury as Philadelphia returned to winning ways.

“I appreciate him, I respect that, we needed to play well here at home, we haven’t been on the right side of the win-loss column lately.”