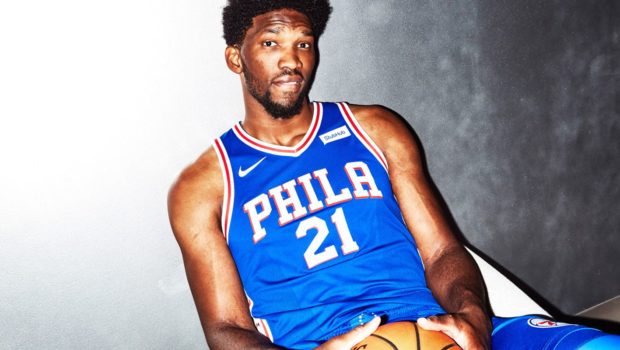 HOW SIXERS’ JOJO EMBIID IS TROLLING THE NBA ON THE COURT AND SOCIAL MEDIA!

TO UNDERSTAND EMBIID, you must first understand the psychology of the troll. As anyone who has ever checked his Twitter mentions knows, there are all sorts of trolls. Mean ones, funny ones, bullies, racists, pranksters. They all have the same goal: to get a reaction.

Embiid is a playful troll.

“I don’t go over the line, but I feel like I’m always right there,” he says with a grin. Of course he is aware it makes people within the organization crazy that their budding superstar keeps giving shoutouts to the deposed general manager who led the franchise to one of the worst stretches in NBA history. That’s kind of the point.

“I won’t mention names, but a lot of people weren’t happy” with his call-outs, Embiid says. “I don’t care. To me it was like, we’ve gone through so much, and I get that Sam Hinkie wasn’t the most loved in Philly, but that was the guy who drafted me. I still like him. He did a lot for me.”

So he calls himself The Process, over and over, mischievously defusing its bite with humor and hashtags but still cutting right up close to the quick.

“I’m not doing it to hurt anybody’s feelings or create a situation,” Embiid says. “I just think it’s funny.”

This is the essence of Embiid. Always flexing. Kidding but not kidding. Trolling on social media, trash-talking on the court, playfully tweaking people to see what they’ll do about it. But Embiid is pushing himself as much as he’s pushing buttons.

So he likes the pressure it puts on him?

“I love the pressure.”