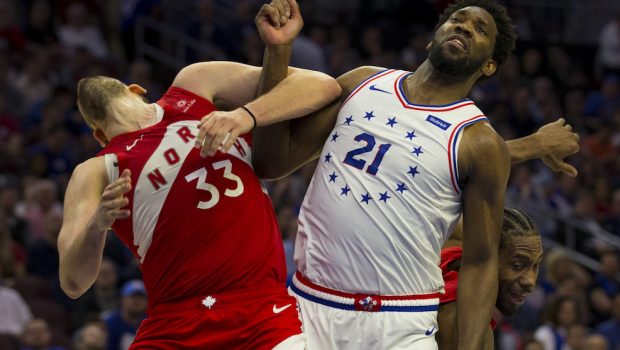 Sixers center Joel Embiid is pissed he got called for a flagrant foul Thursday night.

And if he gets another one in the playoffs he’ll be docked a game!

Late in the fourth quarter of the Sixers’ 112-101 victory over the Toronto Raptors in game 6 of the Eastern Conference semis, Embiid flicked center Marc Gasol in the face with his hand as they were battling for a rebound.

Embiid, who finished with 17 points and 12 rebounds, was called for a flagrant foul, his third point of this year’s playoffs.

“It just happened. A lot of things like that happen. I got hit in the face in the first half by [Toronto’s] Pascal but kind of like the same situation, that wasn’t flagrant. I saw the video of it, I mean it doesn’t look that bad. It’s tough.

“I guess I get one more and I’m gone for one game. So I got to look out for it, but that’s definitely, this one and in the one in Brooklyn that I feel like I didn’t deserve.”

During the first-round series against the Brooklyn Nets, Embiid received two flagrant 1 fouls, elbowing Jarrett Allen in Game 2, then in Game 4 fouling Allen, who was attempting a layup.

That led to a fight on the court, and the Sixers’ Jimmy Butler and Nets’ Jared Dudley were ejected.

The Sixers and Raptors meet in the deciding Game 7 on Sunday in Toronto.

Another flagrant foul for Embiid would mean getting suspended for Game 1 of the Eastern Conference finals in Milwaukee if Philly beats Toronto, or sitting out the first game he plays in the 2019-20 regular season if they lose the semi-finals.