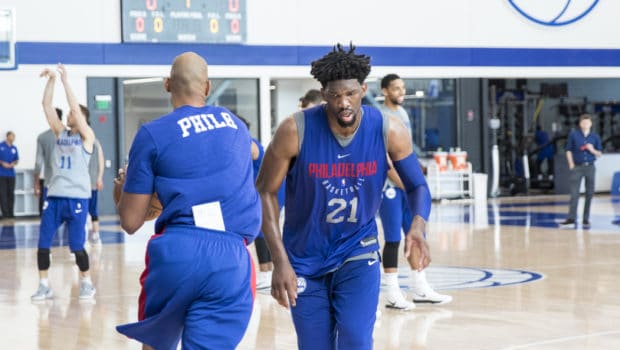 When Sixers’ center Joel Embiid participated in half-court 5-on-5 during the final day of training camp.

Thereby shutting up the lame-ass media like Michael Barkann who were screaming about the fact that he hadn’t as if they were disclosing info that we needed to have.

The Sixers have not set a specific date for Embiid’s return. He is targeting opening night, Oct. 18 against the Wizards in Washington, D.C. Embiid has not played in a game since Jan. 27.

Embiid worked out and rehabbed at the Sixers’ training complex over the summer. He has been part of practices, but this was the first time he was on the court in this type of game-like setting.

“It’s a whole different thing for his teammates,” Brown said. “You have another incredible weapon and target that you have to get the ball to or recognize that he is behind you defensively.”