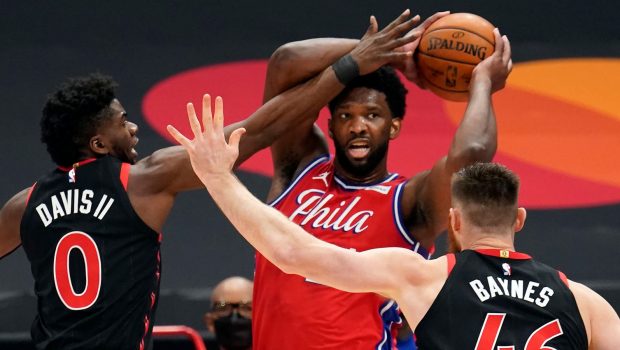 Matched against fellow MVP candidate Luka Doncic, Embiid led the 76ers to their fourth win in five outings on Thursday, as they forced the Mavericks into a season-high 22 turnovers, including 13 in the first half. Still, you can’t overlook Embiid’s field goal percentage (26%) over the last three games, or the fact he’s making his living largely at the free-throw line lately, despite coming into Thursday’s game averaging 29.8 points.

“It’s funny, you know he’s big, but you don’t realize how big he is, and his post game is so much more efficient than I remember it,” 76ers coach Doc Rivers said.

Meanwhile, LeBron James continues to struggle to keep Los Angeles afloat in the wake of an injury to Anthony Davis and the absence of Dennis Schroder due to the league’s health and safety protocols for contract tracing.

James is averaging 37.3 minutes over the 12 games he’s played in the month of February, but the 36-year-old isn’t asking anyone for a reprieve.

“I’m going out and playing the game,” James said Monday after playing more than 43 minutes in Los Angeles’ 127-124 overtime loss to the Washington Wizards. “I’m doing my job, and I’m trying to do it at a high level. I have never asked for time off or time throughout the season, and it’s growing to a point where it’s not even coming from me anymore.

“It’s just like, ‘O.K., LeBron should take time off,’ or ‘Why is his workload at this?’ I’ve been hearing it for five, six, seven years now, and I’m still going strong. So, I don’t need a handout. I’m not looking for a handout. My job is to go out when I’m available, when I’m healthy to go out and play, and that’s what it’s all about.”