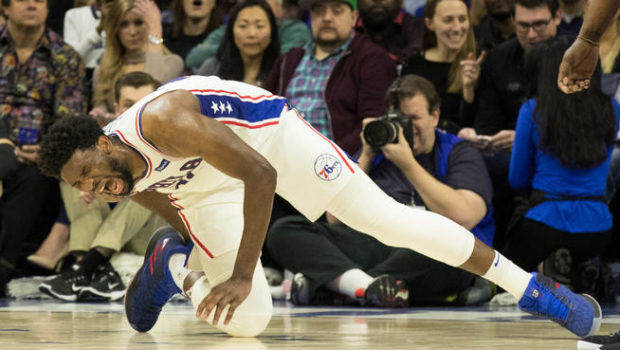 Midway through the fourth quarter of the 112-98 victory over the Los Angeles Clippers, Joel Embiid took a fall and a seat at the end of the bench.

”Joe is very dramatic,” JJ Redick said. ”I’ve played with a lot of good actors in my career, and he’s definitely in the top three. He could have a future in Hollywood if he wanted to.”

Embiid drove on Clippers guard Tyrone Wallace, lost control of the ball and slipped trying to get it back. He fell to the floor and banged his knee with his fist a few times before getting up and slowly walking to the bench.

”There’s a difference between agony and selling a foul,” Redick said. ”We all do it. It’s part of the game. I wasn’t concerned.”

Embiid was fine. He returned to the game with 4:53 left and later made a free throw to cap an 8-0 run that sealed the Sixers’ third straight win.

”My hand got tangled inside my leg as I was reaching for the ball. Nothing happened,” Embiid said. ”I kind of hit my knee on the floor, but I feel great.”

A game-time decision for the second straight night with a sore ankle, Embiid was playing in back-to-back games for just the second time in his career. He finished with 29 points and matched a career high with 16 rebounds in 34 minutes.

”I was getting tired,” said Embiid, who moments before the tumble barely drew iron on a short jumper.

After the game, he quickly grew tired of being interrogated.

”Can we just stop talking about my knee?” he said.

Embiid had plenty of help Saturday night. Redick had 17 points, including 5 of 10 from 3, and McConnell had 17 along with eight assists. Ben Simmons had 14 points and 10 assists.

The Sixers cooled off in the third, going 1 for 10 from 3, and committed five turnovers, allowing the Clippers to creep within six and enter the fourth down 85-78.

The Clippers got within 95-93 with 6 minutes left, but McConnell hit a tough turnaround in the paint, and Redick nailed his final 3.

”I just thought they were fresher tonight,” Clippers coach Doc Rivers said. ”They played last night, too – obviously they didn’t have to travel. It felt like every loose ball and 50-50 play, they got.”

”This was a great win. This is one of our best wins of the season. I really believe that,” said Redick, who spent the last four seasons with the Clippers.

”It always feels good to beat your former team. Nothing but love for those guys over there, but that last 3-pointer, I emphasized that a little bit. That was ballgame. That felt good.”

And fortunately, so does Embiid.

”For a quick moment there, I was worried,” coach Brett Brown said, ”but they cleared him to come back in and play . and life’s still good.”