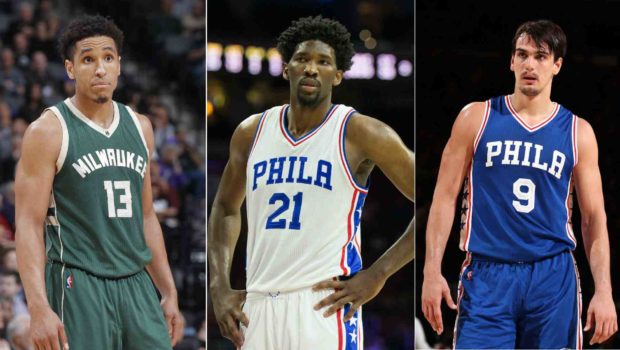 SIXERS JOJO AND DARIO BATTLE FOR ROOKIE OF THE YEAR TONIGHT!

Tonight’s the night when the NBA will host its inaugural awards show on TNT AT 9 P. M., with the 76ers well-represented in one particular category.

Joel Embiid and Dario Saric account for two of the three finalists for the 2017 Kia NBA Rookie of the Year award. Rounding out the group is Malcolm Brogdon, a guard from the Milwaukee Bucks (above).

In just 31 games Embiid powered his way to 20.2 points, 7.8 rebounds, and 2.5 blocks. He became the first player in NBA history to achieve those averages while logging fewer than 26.0 minutes per game (25.4).

The 7-footer was not only dependable from the free throw line, where he shot 78.3%, but dangerous from deep. He hit 36 3-pointers, and converted 36.7% of his attempts.

More often than not, when Embiid was on the floor, there seemed to be little opponents could do to slow him down. He reached double-figures in all but one of his 31 outings, and posted 19 20-point performances, two of which were 30-point efforts. The recently-turned 23-year old cranked out nine double-doubles, too.

Almost immediately after Embiid was injured, Saric began to step up. From January 30th through to the end of the season, he paced the team in points (17.0), and ranked second in rebounding (7.4).

For the year, Saric placed second behind Embiid in rookie scoring, with an average of 12.8 points per game. His 6.3 rebounds per tilt were third-best among his first-year peers, as were his 106 triples. He was one of 11 players in the NBA this season – and the first Sixer of all-time – to average 12.5 points, 6.0 rebounds, and 2.0 assists, while nailing at least 100 threes.

Saric netted 14 20-point games on the year, including a career-best 32-point outburst March 24th in Chicago. His 10 double-doubles were second in 2016-2017 rookie class. He pieced together a string of 22 straight double-digit scoring games from February to March, and was tabbed Eastern Conference Rookie of the Month for both months.

Should either Embiid or Saric wind up taking home Rookie of the Year honors, it would mark the third time in league history that a member of the Sixers has done so. Allen Iverson was designated the NBA’s top rookie in 1997. Michael Carter-Williams achieved the feat in 2014.