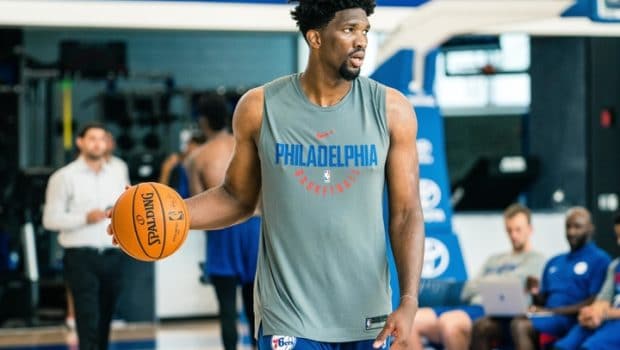 SIXERS JOJO EMBIID, BEN SIMMONS HAVE CHIPS ON THEIR SHOULDERS!

Sixers’ center Joel Embiid dealt with the BS that the lame-ass media has been spreading about him and the Sixers:

“I’ve seen what everybody’s said on Twitter,” Embiid said the other day. “It doesn’t bother me. I love it, I love critics and it just makes me better. I love seeing people say I can’t do this and I’m going to go out there and work on it and come back the next game or whenever I can and show that I can do this.” And Ben Simmons, the No. 1 overall pick last year, can’t wait to make his NBA debut after missing an entire season because of a broken right foot. He sounded a bit slighted that people aren’t mentioning him as a potential Rookie of the Year candidate.

“They’ll remember,” Simmons said. “I came to the States when I was 15 and nobody knew who I was, so I feel like I’m kind of back at the stage and I got to prove myself again, which is fine. I’m looking forward to that part.”

Simmons declared himself 100 percent ready to go, but Embiid has not been cleared for 5-on-5 drills, and the team will take a cautious approach in his return from his injured left knee. Embiid said scans look “perfect,” and he’s aiming to be ready for the season opener.

Embiid, the No. 3 overall pick in the 2014 draft, played only 31 games last year after missing two full seasons. His career has been riddled with injuries dating to his college days at Kansas. He had surgery on March 24 to repair a torn meniscus in his knee.

When he played, Embiid looked dominant. He averaged 20.2 points and 7.8 rebounds last season.

“People still haven’t really seen what I can do,” he said.

Simmons will open as the point guard with rookie No. 1 overall pick Markelle Fultz joining him in the backcourt.

“He’s a great player, a good friend and our chemistry is getting better every day and that will play a big role in this team’s success,” Simmons said.

Sixers coach Brett Brown said Simmons has been dominating in the gym.

“Compared to last year, I’m a much better player,” Simmons said. “It’s not even close.”

The 19-year-old Fultz is certain he can fit into a lineup that also includes Dario Saric, Robert Covington, J.J. Reddick, Amir Johnson and others. The Sixers also signed free-agent forward Kris Humphries and center Emera Okafor to complete their camp roster.

“You can’t think you’re not going to make it,” Fultz said. “You’ve got to believe it in order to do it.”

The Sixers were 47-190 between 2013-16 before going 28-54 last season. Expectations are much higher now and fans are talking playoffs. Las Vegas oddsmakers set the over/under for win total at 42½.

“We have a lot of potential,” Embiid said. “We have to learn to play together. As long as we stay healthy, the future is bright.”