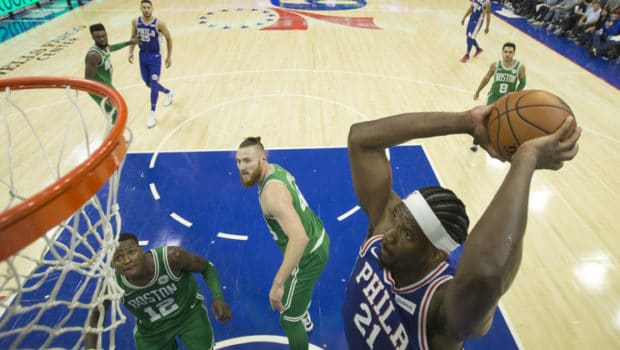 HOW SIXERS’ JOJO EMBIID HAS BECOME AN NBA 2-WAY FORCE!

According to ESPN Insider:

The adjustment opponents have made in attacking Embiid is especially notable when comparing similar early adjustments that were made with respect to Draymond Green and Rudy Gobert. Though players are also attempting fewer shots than a year ago with them as a closest defender, the dropoff hasn’t been nearly as stark as it’s been for Embiid.

Shots Against Per 100 Possessions

All things considered, the fact that Embiid still isn’t seeing the floor for even half of his team’s total minutes precludes him from truly entering the conversation for best two-way player. We are still dealing with a limited sample size here (78 total direct post-ups, for instance, according to Second Spectrum).

It’s also why another area for improvement — Embiid’s propensity for fouling — has yet to become much of a problem, as he simply hasn’t had the burden of learning to play in foul trouble for the sake of staying on the floor for 40 minutes in high-leverage situations. It’s one thing if he’s limited due to an imposed minutes restriction. It’s another if his own play keeps him saddled on the bench.

Until he gets them under control, the combination of fouls and turnovers will likely keep Embiid from climbing any two-way, all-encompassing leaderboard.