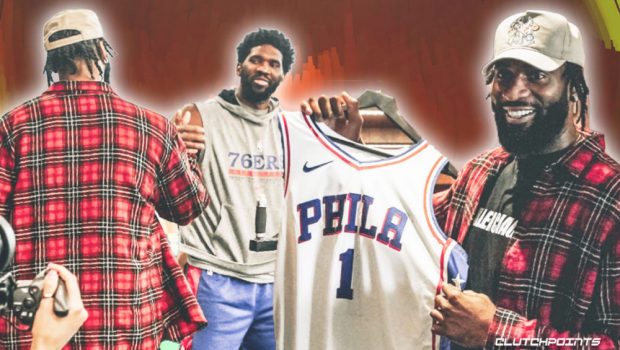 On Tuesday, Andre Drummond and the Sixers agreed to a one-year deal for the veteran’s minimum, which sparked witty responses from fans who’ve watched Drummond and Joel Embiid’s on-court battles and subsequent social media spats.

And yesterday they met up at the Sixers gym in Camden, and it was all smiles!

Drummond will fill Dwight Howard’s place as Embiid’s understudy, as long as Embiid remains healthy. Howard agreed to return to the Lakers on a minimum deal Monday night.

The rivalry between Drummond and Embiid stretches back to at least Oct. 2017, when Drummond — while with the Pistons — apparently trash-talked with Embiid.

“Defensively, he doesn’t play any defense,” Embiid said at the time. “When we started the game, he was being aggressive and he was talking, too. … So what I was like [in my mind] ‘You want to do that? I’m going to kick your [butt] then. So that’s what I did.”

In response to Embiid’s comments, Drummond tweeted the date of their next matchup that season, “See you Dec. 2nd [2017].” Before that game, Embiid took another shot at Drummond, telling reporters, “No disrespect but he can’t shoot.”

The rivalry hit its peak in 2018, when Embiid got Drummond ejected from the fourth quarter of a game when he flopped after Drummond’s arm flew near his head.

A few weeks later, Embiid called Drummond a “bum” in a tweet that read, “I own a lot of real estate in @andredrummondd head and I’m on my way to build more.”

More recently, Embiid has said his trash talking days are over following the birth of his son, Arthur in Sept. 2020.

The 27-year-old also downplayed the Drummond beef in March 2020, when he told Bleacher Report, “We never had a problem, it’s basketball I talk a lot of trash. He does it on social media, I do it in the game.”