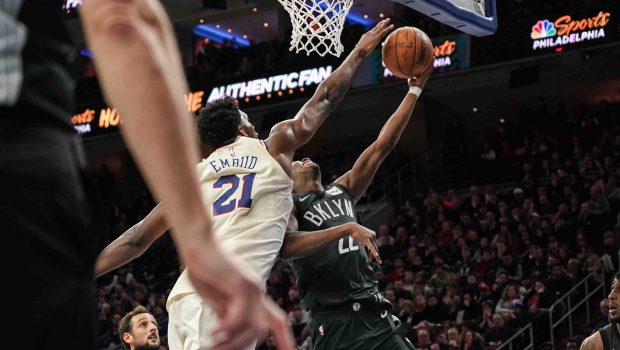 SIXERS JOJO ‘DOUBTFUL’ THIS MORNING: GAME WILL BE PLAYED TONIGHT!

The Sixers charter touched down in Miami yesterday for tonight’s game 3 in their playoff series with the Heat after splitting the first two games in Philly.

Rehabbing star center Joel Embiid was on the plane and he practiced.

But will he play tonight?

“Doubtful” is the official word.

Embiid has been sidelined since March 28 due to a broken orbital bone and a concussion. He cleared the NBA’s concussion protocol earlier this week and practiced with the Sixers on Tuesday and yesterday.

Prior to the Game 2 loss, thew Sixers had been 9-0 during Embiid’s recent absence. Sixers coach Brett Brown has said several times that the club missed Embiid badly in Game 2.

But Brown has stressed that Embiid — who averaged 22.9 points, 11.0 rebounds and 1.8 blocks in 63 games in the regular season — will not be rushed back if Philly falls behind in the best-of-seven series against Miami.

Embiid took “a little bit of contact” during practice on Tuesday, Brown said, although it seems as if he is unable to engage in full contact with defenders.

“Whenever the time comes when he does play, I think [his conditioning will improve] in a more rapid way. His body looks great,” the coach said. “If you just look at him physically, I think he looks fantastic. I feel like it will kick in quicker than most.”

Brown also said there would be at least a slight adjustment required to implement Embiid into the offense after a nearly three-week absence.

“I think defensively, he immediately comes in and changes the landscape,” Brown said. “The game is being played so fast right now [and] he has not been with us for a while, so I think the adjustment offensively might be a little bit more noticeable than defensively initially.”