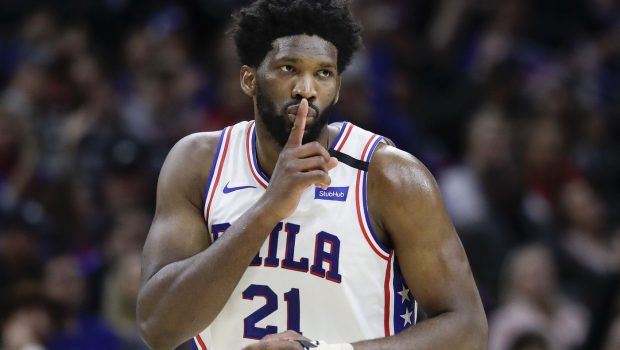 SIXERS JOJO BACK TO BEING ‘A GOOD ASSHOLE’ — AND FANS LOVE IT!

The past week has seen the best and worst of Sixer All-Star center Joel Embiid.

And also the best and worst of Philly sports fans.

One caller on a sports radio station said, “Joel Embiid is a coward and I will not watch any more Sixers games until he’s gone.”

A caller on another station demanded the Sixers trade Embiid. “The fact that we’ve got people calling in and defending him just shows how soft of a fan base we’ve become. Are you freaking kidding me?! This guy just said, ‘Shut the eff up’ to the entire Philadelphia region and we’re like, ‘It’s OK, Joel!’ No! Get this bum out of this city. He’s worthless. He’s fat. He can’t take care of himself. I don’t care for him anymore. I don’t want him on my

When the Sixers’ starting lineup was announced before Tuesday home game against the Los Angeles Clippers, Embiid was met with light boos, just enough to know fans weren’t happy with him. That quickly changed: A minute into the game, Embiid grabbed a rebound and plowed through a defender for an and-1 opportunity, and the crowd roared with approval.

Embiid and Ben Simmons each scored 26 points, and the Sixers won 110-103. During the game, Embiid baited Clippers forward Marcus Morris into a shoving match—whether that was symbolic of Embiid’s week, or just some general shit-stirring, it reenergized the home fans. The sound system played “Wicked” by Future over the loudspeakers, and Embiid gave one of his classic shimmies.

“The natural first question for you,” TNT sideline reporter Jared Greenberg posed to Embiid after the game: “Are you the hero or the villain tonight?”

“I’m always going to be both,” Embiid said with a wry smile. “I start with my city. I love my city. They’ve shown me a lot of love since I’ve been here. You know, we’ve gone through ups and downs. We learn from it. There’s nothing more. Just playing with each other, having fun. Like I said, I’m back to being a good asshole. Sorry for cussing, but I’m gonna do my thing.”

After the game, Embiid said he felt that if the fans can dish it, they should also be prepared to take it. “They’ve been going at me. I went back at them. We’re all human beings. If I can take it, everybody else can too,” he said, noting that he knows he could be doing a better job on the court and that the team still has championship aspirations. “I could have shushed them again, but it was all about having fun again, getting back to myself … I do know that [the fans] got my back. Through the injuries and what we been through, I’m still here.”

For much of this season, Embiid has largely taken a back seat in Brown’s offense. He’s averaging fewer points and rebounds than last season, he’s getting to the line less often, and his field goal percentage and attempts per game have decreased. He’s seemed less aggressive, less frequently the unstoppable force we’ve grown accustomed to seeing. As a team, the Sixers vacillate between lackluster and dominant performances. They needed something to push them closer to an identity. Perhaps Embiid provided it.

Many Sixers fans say Embiid can’t fit with Simmons and that he should be traded. It’s not uncommon for Philadelphians to boo when their best and brightest fall short of their expectations. They did it to Allen Iverson, Donovan McNabb, Ryan Howard, and many others. For once, an athlete spat back—regardless of motivation or catalyst—and said, “Fuck me? Well, fuck y’all, too.”

What we saw from Embiid and the Sixers this week might end up being a flashpoint in their season. The win over the Clippers was one of their most dominant performances. They looked like the team everyone envisioned, which made sense, considering they refocused the offense around Embiid.

Philly crave the villain as much as they do the hero. They want to see themselves in their stars. A common online retort about the Sixers is that fans need to bully them into being champions. Embiid’s response, at least for a moment, gave Philly fans what they had been craving. What a beautifully deranged church, a fan base filled with haters who pray that their fanciful dreams, positioned as expletives, get answered. This all might seem silly to some. Where you come from, perhaps. In Philadelphia, next to our dirty rivers and even filthier dispositions, we just call this charm.