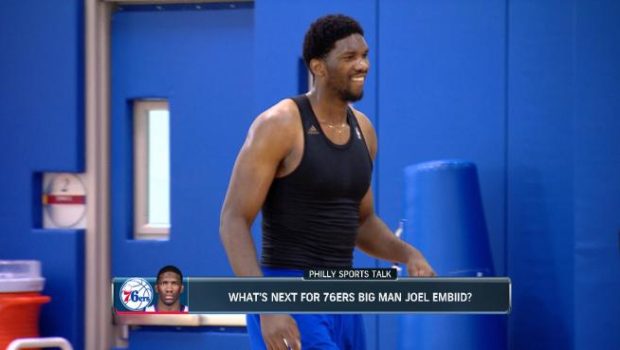 SIXERS’ JOEL EMBIID, OUT 2 YEARS WITH INJURIES, CLEARED TO PLAY!

Joel Embiid, the Sixers’ top draft choice in 2014 who has not played a minute due to two surgeries on his right foot, has been cleared to play.

After a full year of rehabilitation, Embiid has been cleared to start light scrimmaging in five-on-five settings, league sources told Yahoo.com’s the Vertical.

The 7-foot Embiid has been impressive in his non-contact workouts in recent weeks at the 76ers’ facility, sources said, and the soundness of his problematic right foot should continue to allow him to begin preparations for next season.

Embiid, 22, is expected to travel to Las Vegas for the 76ers’ entry in the summer league in July but only to practice with the team, sources said. There’s no plan for him to participate in summer league games.

Embiid has not played an NBA game since being drafted because of foot surgeries. Last summer, Embiid had a bone-graft surgery to repair the navicular bone in his right foot.