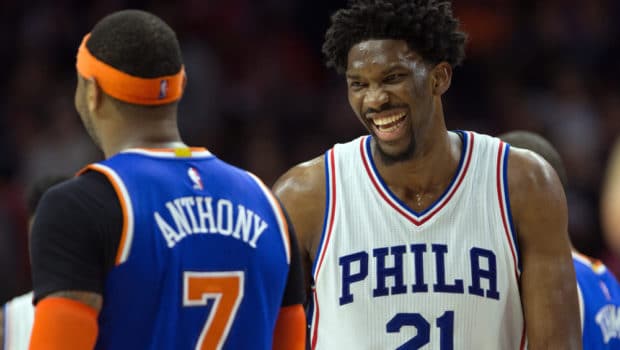 Sixers center Joel Embiid wants you to know he was the NBA’s rookie of the year!

Even though he played in 31 games as a rookie — and missed 51 in total, due to both his injury history and a new knee setback.

When picking the NBA’s Rookie of the Year, Embiid hopes those who voted exercised selective recall — overlooking those aforementioned numerals in favor of others attached with his first season in the NBA. Such as: 20.2 points, 7.8 rebounds and 2.5 blocks in 25.4 minutes per game.

The 23-year-old phenom, whose past several years have been plagued with foot, back and knee damage, recently told ESPN’s Jackie MacMullan he should win the award.

“I know people are saying about me, ‘Oh, he only played 31 games.’ But look at what I did in those 31 games — averaging the amount of points I did in just 25 minutes,” Embiid argued for his case.

Neither of the other candidates for the award, his Sixers teammate Dario Saric and Milwaukee guard Malcolm Brogdon, dominated in the fashion Embiid did. But they did play the bulk of the 82-game schedule, so voters will not as much reward them for that as count Embiid’s relative lack of appearances against him.

Had Embiid come along in another year, under the same circumstances, it would be easy to select some other promising rookie ahead of him. But because there was no Andrew Wiggins or Karl-Anthony Towns type making his NBA debut in 2016-17, Embiid is likely to still get some love as the top rookie. If there were a category for mesmerizing on-court moments, Embiid would blow away the competition —Saric, Brogdon and the rest of the rookie class combined. Some who voted for the award must have come back to that while processing their decision.

The votes are in. A rookie of the year already has been selected. We just won’t know the results until, June 26, when it’s announced at the league’s inaugural NBA Awards Show.

Embiid told MacMullan his production when healthy should count for something.

“Even going back to the All-Star Game, I didn’t get chosen for that, and people were killing me because I didn’t play 30 minutes a game,” Embiid said. “But here’s what I don’t understand: If I put up those numbers in less time than another guy, what’s the difference? Doesn’t it mean I did more in less time? Wait until I play as many minutes as those guys, then you will see what I do.”

Of course, we’ll have to sit tight until next season to see more of Embiid. At least early reports on his health are promising. Before the 76ers shut down their franchise center for the season, the team feared he had fully torn the meniscus in his left knee. However, Embiid was flexing his surgically-repaired leg with no pain during his interview with ESPN.

Currently in the early stages of rehabbing, Embiid said his summer plans revolve around strengthening both legs, so he holds up better over the course of his second year of playing.

“I realize I have to take better care of myself,” the big man from Cameroon said. “I didn’t realize how good I could be. Especially seeing what I accomplished this year … I want to keep on getting better.”

Sixers head coach Brett Brown, like many, looks forward to the day when Embiid can just exist as a regular player, in terms of his availability. Brown recently spoke with The Vertical’s Adrian Wojnarowski about the challenges associated with his most talented player only functioning in limited stints.

“I always felt that he was on lend. We couldn’t really practice him, he had multiple minute restrictions, he couldn’t play sometimes back-to-backs,” Brown said, before commending Embiid for handling it all relatively well.

“Because he is so highly competitive — it’s the single quality of Joel Embiid that I’m most attracted to; he is just fiercely competitive — then that became a challenge,” the coach explained. “He didn’t want to hear it. He wants to play.”

Maybe voters remembered those 31 games and counted the 51 missed against Embiid. But the true hope is a Rookie of the Year Award — whether won by him for being the most impressive first-year player, or someone else by default — will long be forgotten by the end of a lengthy, prolific career.