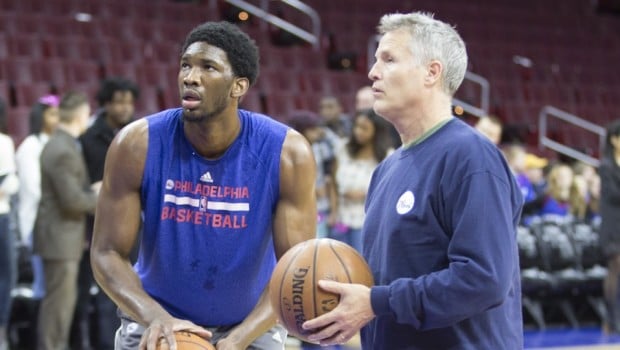 SIXERS’ JO JO WILL TAKE A STAYCATION THIS SUMMER!

If you are hanging in there, hoping to see Sixers center Joel Embiid play this summer, take a vacation.

Because that’s what the rehabbing Jo Jo will be doing too!

Since becoming the No. 3 overall pick in the 2014 draft, Embiid has yet to appear in a single game for the Sixers, sidelined both of his first two seasons with foot injuries. The Sixers are optimistic that he’ll return this season, but team CEO Scott O’Neil says not to expect the big man at Summer League in Las Vegas.

“We’re going to take every percaution you’d imagine us to take and be resonsible,” O’Neil told Michael Barkann. “I think Bryan [Colangelo] has been on record saying it’s pretty unlikely you’ll see him in Summer League and I’ll say that’s a good assessment.”

On Tuesday, the Sixers landed the No. 1 overall pick in the draft lottery. It would make sense, with Dario Saric set to come over from Europe, for them to move at least one of their three young bigs (Embiid, Nerlens Noel and Jahlil Okafor). It won’t be Embiid — he has zero trade value because of his injuries, and he also has the highest upside if he can ever get healthy. The Sixers say he’s moving in the right direction. Hopefully he is.