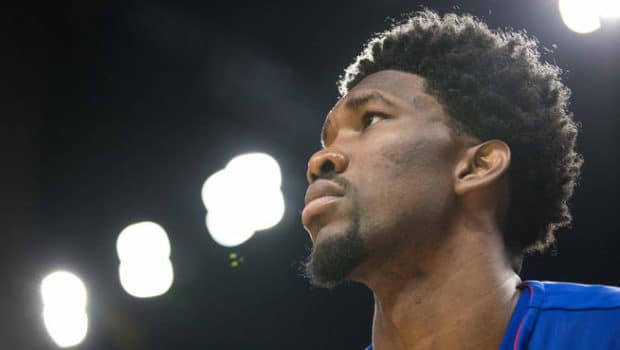 For those of you who were thinking that the Sixers’ recent surge of winning was a flash in the pan:

Check out what they did yesterday in Milwaukee!

Joel Embiid scored 18 of his 22 points in the second half and the Sixers won for the fourth time in five games, beating the Bucks 113-104.

The Sixers improved to 13-26. Their only recent loss was Saturday at Washington, when Embiid didn’t play.

Embiid is limited to 28 minutes per game while trying to overcome injuries that have slowed his career.

“My legs were really heavy and I didn’t play against Washington, so I got out of shape so easily,” Embiid said. “In the second half, I just got it going. I rely on my defense to get my offense going and we played really well defensively.”

“He started the game in the first half, very unlike Joel, he really struggled,” 76ers coach Brett Brown said. “The way he came on in the second half, particularly with his competitive physical mind and the way he played, really set the stage and set the table for our defense.”

Jabari Parker and Giannis Antetokounmpo each scored 23 points for Milwaukee. Antetokounmpo was in foul trouble for most of the second half, scoring only two points in 11 minutes after the break and fouling out with 2:51 to go.

“We had to do something because he really took control of the game in the first half,” Brown said. “Our team defense around Giannis improved.”

Dario Saric scored 17 points and Ersan Ilyasova added 12 for the Sixers, who made 14 of 37 3-point attempts.

The Bucks have given up at least 10 3-pointers in their last seven consecutive games, with opponents taking at least 30 3-point attempts in four of their last five games.

“At some point, we have to understand what the 3 means to us as a team if we want to win,” Milwaukee coach Jason Kidd said. “We can talk about it, but if there’s no effort in guarding it and understanding, again, it starts with effort. If we don’t give it, we’re going to give up a lot of 3s.”

The 76ers’ 12-2 run took control of the game midway through the fourth quarter. A dunk by Jahlil Okafor began the burst and Embiid capped it with a pair of free throws.

Milwaukee missed 10 of its first 13 shots in the quarter to fall behind 97-87 with less than 5 minutes to play.

“Everyone says we have a young team, but that’s an excuse,” Bucks guard Malcolm Brogdon said. “I think there’s a lack of focus. We’ve got to come out collectively, it’s not anybody individually. It’s a unit.”