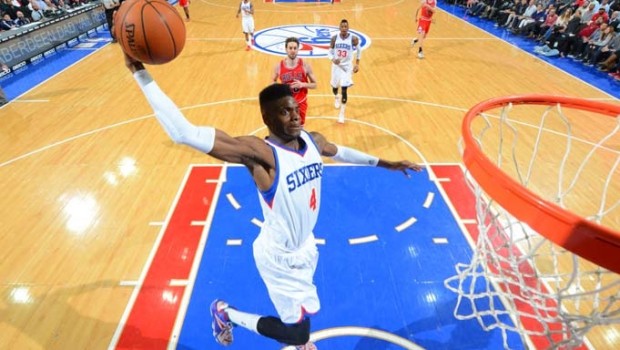 SIXERS NO NO AND JAH: HOW NOEL AND OKAFOR WILL PLAY TOGETHER

When the Sixers drafted Jahlil Okafor last month, the Philly media — especially the out-to-lunch John Gonzalez — had their shorts in a twist over:

“How will Nerlens Noel, Joel Embiid and Okafor ever be able to play together?”

But until Embiid is cleared to play after rehabbing his foot for the past year, the question has become:

How do No No (above) and Jah (below) play together? Okafor’s polished post game dominated college basketball in his lone season at Duke, and he enters the league as a the best-prepared NBA rookie center since maybe Hakeem Olajuwon in 1984.

We can temporarily discount Embiid with reports circulating that his foot injury might have endured further complications. But even with a healthy Embiid, Noel is the most likely candidate to downshift his position.

His lateral quickness and athleticism—the two assets that make him such a dangerous rebounder and shot-blocker in the first place—provide him with defensive versatility. Though he’s not the most physical player, he has the physical tools to stick with quicker 4s.

But it’s on the offensive end where this positional transition makes the most sense. Noel has never been a true back-to-the-basket player. Though he attempted 123 field goals out of the post last season, that only comprised 17.6 percent of his total possessions, according to Synergy Sports. His abysmal 32.5 field-goal percentage on such shots further declares that the block might not be his most effective operating area.

That’s why the Sixers are slowly converting Noel into a garbage-man offensive big—diving off pick-and-rolls for tough finishes/lobs, patrolling the baseline for dump-off passes, offensive rebounding, etc.—while developing his jump shot to help the team space the floor should he permanently switch to power forward.

At heart, Noel is an offensive roamer who feeds off guard penetration to find points. We can see this tendency simply by how he operates in spread pick-and-roll play when the Sixers offense breaks down or no play is called.

Okafor, meanwhile, shot 55.8 percent posting up at Duke, with 53.8 percent of his shots generated from the block, via Synergy. Although his excellent efficiency came against college talent, few players maintain such high levels of efficiency with greater volume.

Unlike Noel, Okafor is a block-to-block kind of guy who eats up space and feasts down low.

That’s his domain, plain and simple.

Last season in Philly, coach Brett Brown had his bigs execute dribble handoffs and other types of short passing all over the perimeter. Noel isn’t a ball-handler by any stretch of the imagination, but he’s capable of making decisions with the ball in his hands.

This is a valuable asset in the pass-heavy offense that Brown runs. Bigs who establish themselves on the elbows open up all kinds of perimeter options for the guards. The defense has to adjust for the ball being close to the basket, which in turn forces it to shrink into the paint. The dribble-handoff action is also a nice alternative to the standstill pick-and-roll, as it keeps both involved players on the move.

Maybe the most crucial piece of the Noel-Okafor combination will be how Noel moves off the ball in isolation post ups. There’s no doubt that Brown will feed Okafor the ball down low, and he proved at Duke that he’s a capable passer in tight quarters.

Finding these crevices in the paint—particularly in two-big lineup combinations—is crucial to maintaining the integrity of an offense’s spacing. Hover too close to a post-up player with the ball and you’ve effectively brought a double-team without