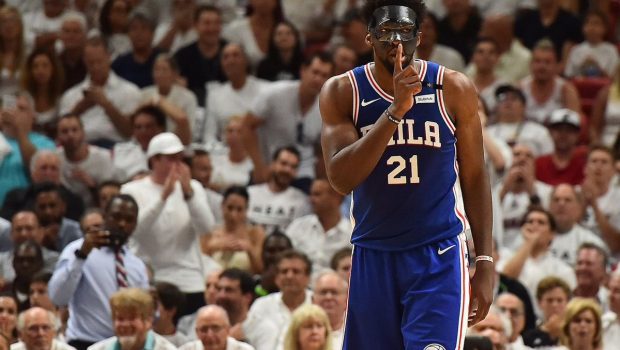 The Sixers have been waxed by the Heat in the first two games of their Eastern semis series.

Joel Embiid has missed both games with a concussion and an orbital fracture.

And it doesn’t sound like Jojo is coming back any time soon.

“Still has hurdles to get over, so there’s no update,” coach Doc Rivers said today.

“The concussion protocols, he has to get through all of that, and all of the other stuff with the injury.”

“This is the playoffs, you don’t get time like in the regular season to come back and work out with staff and stuff for three or four days. Unfortunately, that’s not how the playoffs are built,” Rivers said.

“When guys go down in the playoffs, they often have to come back with no work. That makes it very difficult for them when they come back. That doesn’t necessarily mean they’re going to play great, or sometimes they do, you just don’t know.”

“I would rather not be down 0-2, but should I feel bad? I mean, we lost two games, but you watch the film last night, we played hard, and guys competed,” Rivers said Thursday. “We got great shots…I believe in the guys that we play on the floor that we can make them over the long haul. I thought Game 2 we got great shots, didn’t like them as much, but Game 2, we had a ton of open shots, ton of open threes. The game, when you look at it, came down to the three-point line.”

“We still got really good looks man,” James Harden added Wednesday night. “We got to the paint, we got some really good possessions offensively at times, I think we had eight turnovers, that’s a really good game. We make shots, it’s a different ballgame.”

And though the Sixers would obviously rather go to war with their best player than without him, they have said repeatedly over the last week that they are confident and locked in on what they can do as a group regardless.

“I think our guys are just focused on trying to win Game 3. I don’t know what they’re thinking about, if Joel comes back or not. I think we look at it, if we win Game 3, then the series is as close as you can possibly have it after three games,” Rivers said.

“We are all hopeful he comes back and can play,” Tobias Harris added Wednesday, “and we want him to be healthy because we know how good we are with him.”