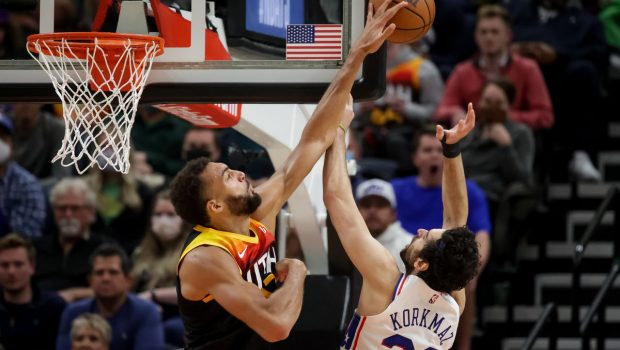 SIXERS HUMILIATED BY JAZZ— WHEN ARE JOJO, THYBULLE RETURNING?

The battered and COVID-isolated Sixers need Joel Embiid and Matisse Thybulle back bigtime.

Otherwise, they will be humiliated a lot more like they were last night in Utah.

Bojan Bogdanovic scored a season-high 27, including five 3-pointers, to power the Jazz to a 120-85 rout of the depleted Sixers.

“Everything starts with our defense and today we controlled the boards and that made it easy to get things going offensively,” Bogdanovic said.

The 76ers shot 37% and only grabbed six offensive rebounds off all those misses. That allowed the Jazz to get into their sets early and produce easy looks.

“I thought we took a lot of tough shots and tried to challenge Gobert. That was not a smart decision by us and they got out on the break,” Sixers coach Doc Rivers said.

Shake Milton scored 18 and Tyrese Maxey added 16 for the 76ers, who have lost five straight games for the first time since December 2017.

Embiid and Thybulle remain in the league’s health and safety protocols and were not with the team. Embiid has missed five games now and Thybulle has sat six games, which has corresponded to a significant dip in defensive efficiency.

Utah went 11-for-19 from 3-point range in the second and third quarters combined to push the lead to as many as 31.

The Jazz went on a 14-0 run to start the second quarter. Clarkson’s peek-a-boo baseline jumper gave Utah a 44-28 lead with 8:10 left until halftime.

Later in the quarter, the Jazz expanded their advantage to as many as 23 points before the 76ers finally made a few shots to pull with 63-47 at the break.

Both teams have been reeling, going a combined 1-8 in the last 10 days so something had to give for one of them. Both teams pointed to their flagging defenses as the primary reason for their skids.

“One thing Doc said on the bench is we can’t be afraid to go 0-for-30. You got to shoot the next shot like it’s going to go in,” Isaiah Joe said. “Our defense could be better, no doubt, but we did miss a ton of wide open looks.”