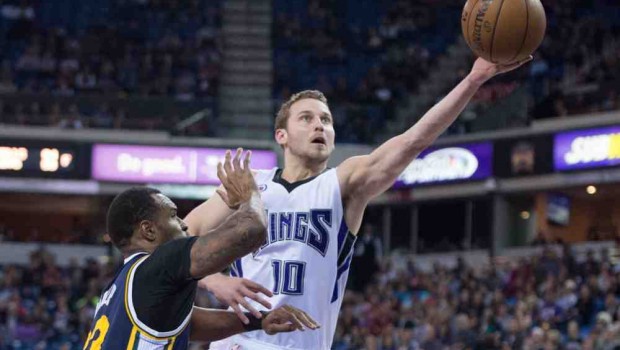 Sixers general manager Sam Hinkie pulled off the deal of the NBA’s best off-season deal when he:

Traded a couple of second-round draft picks who never would have played here to the Sacramento Kings for sharpshooter Nik Stauskas (above), who figures to start at the 2 this fall, and a future No. 1 pick.

How was Hinkie, who has been reviled by pro basketball know-nothings masquerading as experts (many of them still rue the day truly ordinary MCW was sent packing!), able to pull this off?

If you really think the Sixers’ front office and “process” is a failure, you ought to check out the Kings, whose GM Pete D’Allesandro bolted three weeks ago for greener pastures in Denver, leaving acting GM Vlade Divac in charge.

After the trade, the Kings had somewhere in the neighborhood of $26 million in cap space. If they signed a star, or two near-stars, into that space, the trade might’ve been worth it. But most of the top players were already off the board, and the only ones left had no interest in playing for the dysfunctional Kings. The word was that they were pursuing Rajon Rondo, Monta Ellis, and Wes Matthews with that money.

The first shoe to drop was Monta Ellis. He signed a four-year, $44 million deal with the Indiana Pacers. So the Kings got outbid for Ellis, right? Wrong.

That’s the price they pay for having an owner who floats the stupidest possible offensive strategies, firing their good coach, running their interim coach out of town, hiring a coach who thinks trading DeMarcus Cousins is a good idea, and having a mess of a front office. They already struggle to attract free agents because California is a high-tax state and few players want to live in Sacramento, but usually players take the more lucrative offer. But not when that team is the Kings, apparently.

Okay, regroup. Matthews and Rondo still out there. Concentrate on Matthews first, make him a nice offer.

That seems a little steep, but okay. What’s the next step? Wait, an increased offer?

And then there was one: Rajon Rondo. The same guy who played so poorly last season that it isn’t clear he’s even a starting-quality NBA point guard anymore. He is reportedly looking for a one-year deal (probably in the $5–$8 million range) just to prove to the rest of the league he still has it, after which he’ll sign a long-term deal. Meaning, if the Kings use a substantial amount of their $26 million in cap room to sign Rondo, they have done something horribly, horribly wrong. Besides, they already have Darren Collison, a perfectly adequate point guard, on their roster.

The problem was the Kings went about benefitting the present ass-backwards. Let Tom Ziller explain, via Deadspin.com:

Why now? The Sixers weren’t exactly champing at the bit to use their cap space. Go recruit the free agent targets first, then swing the trade to officially open up space. Agents are smart; even if us louts on the internet can’t grok how you have the space to offer Matthews $65 million over four years, you can explain your rock-solid Hinkie Surprise to the agents. Nope, the Kings just went ahead with the trade andnow are trying to poach the free agents. The cart isn’t just before the horse here: the cart has lapped the horse. The horse might be in Vlade Divac’s stables back in Belgrade. The horse may not even exist.

If the deal with the 76ers was time-limited, if it were the Kings’ only chance to free up cap room, than maybe it was worth it. But the deal wasn’t time-limited! It obviously wasn’t!

The Kings mortgaged their future to pursue three second-tier players, and two of them turned down additional money for the freedom of getting to play as far away from Sacramento as possible.