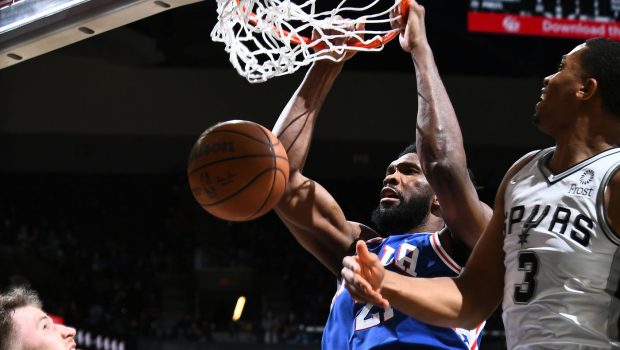 The Sixers still don’t have a real point guard, and they rebound as poorly as any good team has ever rebounded in the NBA.

In addition, last night they played without four players who have been starters from time to time this season.

But they are only 2 1/2 games out of first in the East, essentially because they have a beast:

It was Embiid’s 14th straight game with at least 25 points.

“What he’s doing is special,” Sixers forward Tobias Harris said. “We rely on him night in and night out. He’s the anchor for our team. The anchor for our offensive flow out there. I thought tonight he just did a great job of picking the game apart. Really getting everyone involved out there in their spots and still being able to get the shots that he wanted.”

Harris added 18 points and 11 rebounds and Furkan Korkmaz had 17 points for the 76ers.

Jakob Poeltl had 25 points and 10 rebounds and Dejounte Murray added 19 points and 12 assists for the Spurs.

After trailing by as many as 15 points in the fourth quarter, the Spurs closed to 111-109 on Murray’s steal and breakaway layup with 33.2 seconds remaining as part of an 8-4 run. Embiid would seal the victory with a pair of free throws with 14.9 seconds left.

“They had their chances at the end,” San Antonio coach Gregg Popovich said. “But you make it very difficult when you spot someone a quarter, and we did it again. Same thing the last time we played them.”

Coming off a 40-point performance Friday in a one-point loss against the Los Angeles Clippers, Embiid shot 16 for 32 from the field in 32 minutes.

“He’s tough to guard,” Poeltl said. “We tried to make it as hard as possible with our team defense on him.”

Philadelphia won its fourth in six games despite missing some key players.

In addition to continuing to be without All-Star forward Ben Simmons, the 76ers had four players out with injuries including Seth Curry and Danny Green.

The Spurs rallied, closing the game shooting 48% from the field but were only 10 for 30 on 3-pointers.

“We still had too many defensive mistakes in the fourth quarter,” Harris said. “We’ve got to clean that up. We’ve got to be able to really make a stand and hold our ground there.”