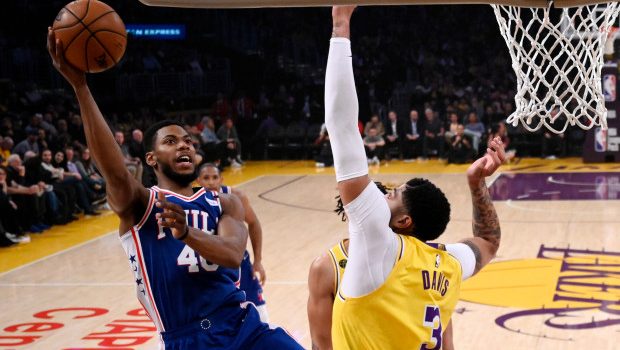 SIXERS HAVE NO STARS AND NO CHANCE AGAINST LAKERS!

Anthony Davis scored 18 of his 37 points in the second quarter, and the Lakers held off the injury-depleted Sixers 120-107.

James had 22 points, 14 assists and seven rebounds for the Lakers, who moved to 47-13 with their ninth win in 10 games. His 40-footer was a stylish flourish on an entertaining all-around game from the Lakers’ two All-Stars, and it came at the end of a 44-10 run in roughly 10 minutes spanning halftime.

Davis hit four 3-pointers while grabbing 13 rebounds and going 13 of 19 from the field, with no basket prettier than his crossover to ditch Al Horford. He made all seven of his shots in the second quarter while the Lakers played some of their prettiest basketball of the year.

”I started off really slow and missed some shots that were wide open,” Davis said. ”I was just trying to figure out how I could get myself going. Once one of us got it going, it got contagious until all of us got going.”

Glenn Robinson III matched his career high with 25 points and Tobias Harris had 18 for the Sixers, who have lost nine consecutive road games since Jan. 20.

Philly’s role players and backups got off to an impressive start, taking an early 13-point lead. That’s when Davis took control with a dazzling quarter that included three 3-pointers. The Lakers made 17 of their 19 shots at one point.

”Obviously we played two really good teams here,” Harris said. ”I felt like we had a good start, and then that second quarter hurt us. I think where the game really slipped was they picked up their defensive intensity, and from there it rushed us.”