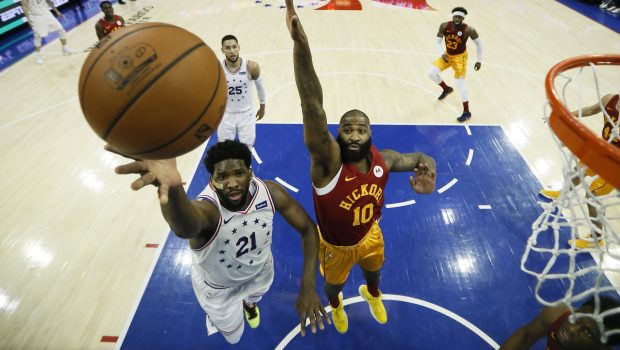 SIXERS HAVE HIGHEST CEILING IN THE EASTERN BUBBLE!

As the NBA re-starts in the Orlando bubble, where do the Sixers stand?

They have the highest ceiling of any team in the East outside Milwaukee.

A new-look starting five showed promise during scrimmages with Ben Simmons playing in the four spot on offense and Shake Milton sharing more of the ball-handling opportunities. And the Sixers still have Joel Embiid in the middle. When healthy and engaged, Embiid can be the best player in a series against just about anyone.

In the East, the Celtics have a 2½-game lead on fourth place, then just two games separate seeds 4-6.

Jimmy Butler has the Miami Heat in fourth place in his first season in South Beach.

The Indiana Pacers and Sixers are tied for fifth and sixth, two games behind the Heat.

Eight games likely aren’t enough for Miami to make a run at Boston for the No. 3 seed, but the Heat have the shooters to get hot playing a condensed schedule, and Butler has emerged as the perfect tough, hard-nosed leader for a Miami franchise that prides itself on outworking everyone.

If the Heat falter, the Pacers and Sixers are both capable of surpassing them in the standings. Star guard Victor Oladipo played in the Pacers’ scrimmages and could still suit up when seeding games begin. His status is still uncertain, but he’d be a huge boon for Indiana after All-Star forward Domantas Sabonis left the NBA campus to seek treatment for a foot injury.