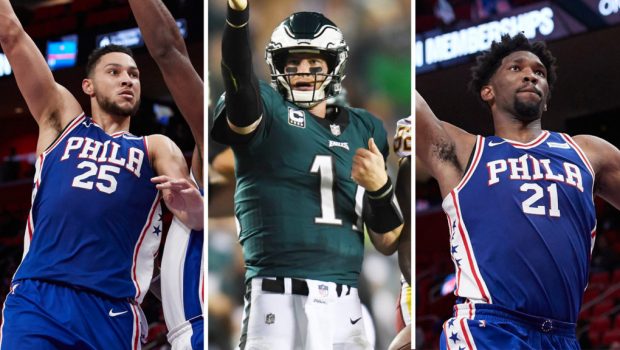 SIXERS HAVE BEEN DISSED ALL YEAR, LIKE 2018 EAGLES SUPE CHAMPS!

The Sixers have been the best team in the Eastern conference of the NBA all year.

That’s why they are the No. 1 seed preparing to open their second-round series against the Hawks at the Wells today.

And they have flown under the radar all year, getting no respect from the national and local media.

In that way, they closely resemble the 2017 Eagles, who were the best team all year, lose Carson Wentz in game 11 and went on the win the Super Bowl with Nick Foles at the helm.

These Sixers may not have MVP finalist Joel Embiid today because of his knee injury. But it’s likely he’ll be back in time to beat the Hawks and the survivor of the Nets-Bucks series.

Don’t expect to see the Sixers wearing dog masks like the Eagles did.

But being dissed by the national media is incentive enough for these Sixers.

Embiid suffered a small tear in his right meniscus 11 minutes into a narrow Game 4 loss to the Wizards and missed the Sixers’ series-clinching Game 5 blowout victory.

Embiid is listed as day-to-day with an injury the Sixers hope to treat non-surgically during the playoffs. Regardless of whether he plays or not, the meniscus tear will almost surely hinder him from being 100%.

With Embiid in the lineup for 51 of their 72 games, the Sixers were the East’s top team in the regular season, beating opponents by 12 points per 100 possessions with him on the floor. Philadelphia outscored the Wizards by 70 points in his 95 playoff minutes and only played Washington even with him sidelined.

Ben Simmons was what Ben Simmons is — an All-NBA and All-Defensive talent whose inability to shoot is a liability at times — and Tobias Harris enjoyed the best playoff series of his career opposite an awful Washington defense. Against those Wizards, the retooled roster around the star Sixers, namely Seth Curry and Danny Green, played the roles they were brought into perform perfectly to start their title chase.

2 thoughts on “SIXERS HAVE BEEN DISSED ALL YEAR, LIKE 2018 EAGLES SUPE CHAMPS!”