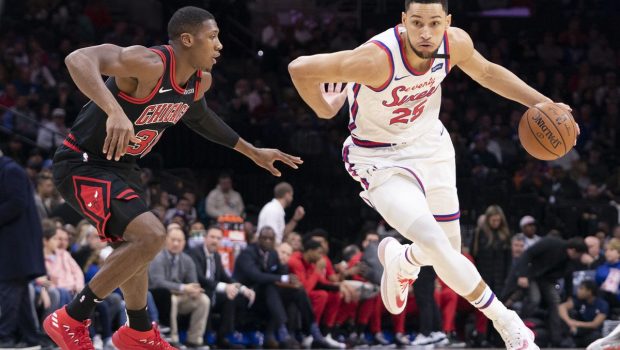 SIXERS HAVE A TOUGH COVER TONIGHT: -8 AT HOME VS. BULLS!

Philly is 0-4 ATS in its last four, while Chicago has covered eight of its last 10 on the road.

Coby White, Patrick Williams and Wendell Carter Jr. may be a big part of the Bulls’ future, but it was the team’s veteran reserves who keyed Chicago’s rally from a 25-point deficit to beat Detroit 105-102 Wednesday. Coach Billy Donovan benched the young trio of starters in favor of Tomas Satoransky, Denzel Valentine and Thaddeus Young to start the second half and Chicago held the Pistons to just 12 points in the third quarter.

“We’ve played well one night, no consistency the next night. It’s hard to be good when you do that,” Donovan told the Chicago Tribune. The Bulls may also have been out of rhythm because of a unique scheduling situation. Both Chicago and Detroit initially had games postponed Wednesday before arranging to play each other instead.

One Bull who hasn’t been out of rhythm at all lately has been Zach LaVine, who led the Chicago rally with 15 third-quarter points on his way to a 37-point outing. LaVine has scored at least 30 points in five of his seven games in February.

The Sixers snapped a three-game losing streak Wednesday with a 118-113 win over Houston, although a second-half letdown cost their backers the point spread cover. Philly led by as much as 29 points and held a 18-point advantage with 10 minutes left before allowing Houston to rally within as close as 110-107 late in the fourth.

Embiid shook off lower back tightness to come up with another huge evening, recording 31 points, 11 rebounds and nine assists. Seth Curry added 25 points on eight-of-13 shooting and is averaging 15.7 points per game in his last six, shooting nearly 47% from behind the arc during that span.

Ben Simmons missed Wednesday’s contest with the flu, two days after scoring a career-high 42 points and adding 11 assists in a loss to the Jazz. Simmons is listed as probable to return to the lineup Friday. Shooting guard Shake Milton, however, is likely to miss his fifth straight game with a left ankle sprain.