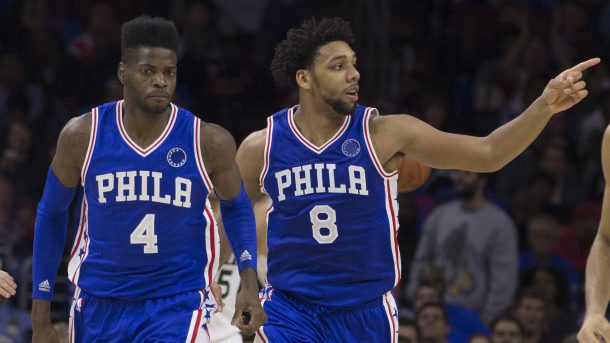 SIXERS HAVE BIGS PROBLEM: WE SHOULD ALL HAVE THESE PROBLEMS!

The Sixers have a boatload of bigs:

Which is not a big problem.

Unless coach Brett Brown can’t find a way to get each his minutes.

Even if you move all Simmons’ minutes to point guard and all Grant’s and Saric’s minutes to small forward that would leave 98 minutes. That’s not far from 96. It just requires exclusively using players at sub-optimal positions.

Not playing Embiid on back-to-backs will help some nights. But for him to meet the Sixers’ high hopes, he’ll have to work toward carrying a larger load. And there are still far more games after an off day.

The 76ers inherited this uncomfortable position from Sam Hinkie, whose Process was tormented by draft redundancies.

And to a certain degree, so what? The greater sin might have been passing on the best prospect for a better fit on a team going nowhere anyway. Throwing good money after bad was not a fix.

If the 76ers have too many valuable bigs, that’s not a bad problem.

But they’re not there yet, and solving that puzzle requires three difficult steps:

Simmons, Saric and Embiid have yet to play in the NBA. Okafor might not fit in the modern NBA due to his lack of rim protection and jumper, and his off-court issues are a red flag. Noel has been up and down, potentially due to injury. Grant and Holmes might just look like overachieving second-rounders in the backdrop of a historically bad team.

Each of these players needs minutes to prove himself one way or the other.

This roster was assembled to stockpile talent, not jell together. In other words, it was built for trades.

But Philly doesn’t want to sell low on anyone – which requires showcasing talent. Good luck with that.

Okafor and Noel fit awfully last season, and it’s difficult to construct a rotation of complementary big men without cutting out some entirely – which defies step one. That’s part of Brown’s sometimes contradictory mandate, regardless.

The 76ers might prefer to trade Okafor rather than Noel, but Noel probably carries more trade value. Big Boss Bryan Colangelo can’t simply dump the bigs he likes least. He must also consider the return.