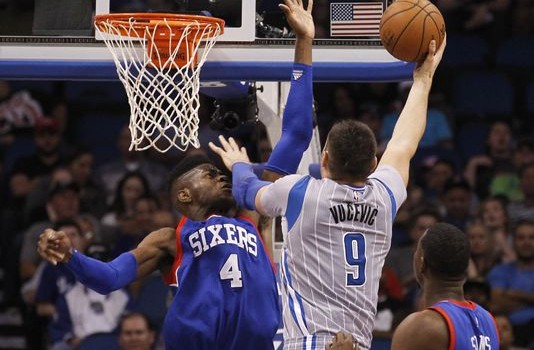 SIXERS HAUNTED BY VUCEVIC IN 103-98 LOSS TO MAGIC

Everywhere the Sixers travel in the NBA there are former Sixers ready to haunt them.

Nik Vucevic, whom the Sixers traded in 2012 in a three-way deal to get Andrew Bynum (who as it turns out never played in Philly) had 31 points and 14 rebounds, and the Orlando Magic beat the Sixers 103-98 on Sunday night for their first three-game winning streak of the season.

Victor Oladipo scored 17 points for the Magic, who nearly squandered a 12-point lead in the final five minutes. Willie Green had 16 points, and Channing Frye finished with 15.

JaKarr Sampson and Robert Covington had 16 points apiece for Philly, which has dropped three in a row. Isaiah Canaan scored 14 points in his first game since he was acquired in a trade with Houston.

Orlando grabbed control with a 10-0 run in the final period, shutting out Philly for four minutes while opening a 91-79 lead. Oladipo started the spurt with a 3-pointer and Tobias Harris finished it off with a baseline drive and jam that got the quiet crowd involved for one of the few times in the game.

Covington started the Sixers’ rally with a three-point play, and then Sampson scored 11 straight Sixers points. His driving layup with 1:37 to play cut the Magic lead to 96-95.

Oladipo and Green then combined for three free throws, and Vucevic’s dunk with 47 seconds remaining made it 101-95.