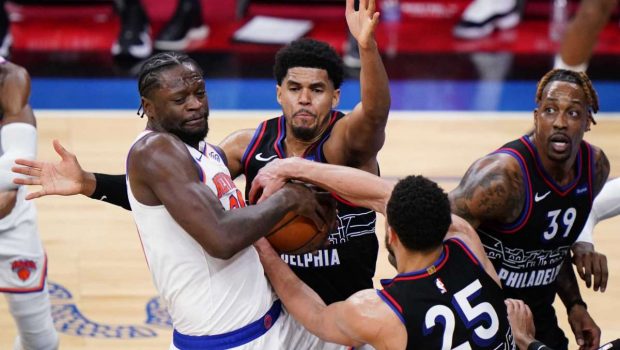 SIXERS HARRIS SHOWS KNICKS WHY HE SHOULD’VE BEEN AN ALL STAR!

Tobias Harris scored 30 points and Seth Curry 20 as the Sixers beat the Knicks 99-96 for their sixth straight win.

The Sixers (28-12) maintained their lead in the Eastern Conference standings, in large part because Harris scored seven straight points, including the tying bucket from 3-feet out and a go-ahead layup that made it 96-92.

He then yelled his All-Star proclamation loud enough for a sellout crowd of 3,071 fans to hear. Harris believed he should have joined teammates Ben Simmons and Embiid in Atlanta.

“I’m sure it fuels him,” 76ers coach Doc Rivers said. “I think Tobias wants to win more, but I still think he thinks he should have been on the All-Star team. I agree with that. ”

Julius Randle had 19 points and 16 rebounds for the Knicks, and RJ Barrett scored 17 points.

The Sixers, again playing without injured All-Star Joel Embiid, had won all three games since the All-Star break by at least 22 points. The Knicks made them work for this one.

The Sixers reserves rallied them in the fourth. Matisse Thybulle and Furkan Korkmaz buried consecutive 3s that brought the Sixers within four and they stayed on the court when Simmons and Harris checked back into the game. Dwight Howard kept it a four-point game on a clean block on Randle’s drive — no restraint needed — and Simmons scored consecutive baskets that made it 89-87.

Randle had to be held back by Knicks teammates after the buzzer following a call that went against him in the final seconds of a loss a night earlier to Brooklyn. The All-Star forward was furious when he was whistled for a travel and the play was not reviewed. Randle’s first season in New York has otherwise been fantastic. The crowd was sprinkled with Knicks fans and there was a brief “MVP!” chant when he went to the free-throw line in the first half. The Sixers promptly turned up the artificial noise.

Randle nearly had a triple-double through three quarters and helped the Knicks pick up their offense over the next two quarters. The Knicks led just 21-20 after a first quarter stuffed with missed shots in an ugly start to the game.

“The 90s are excited about this game,” 76ers President Daryl Morey tweeted.

The Knicks collapsed in the fourth and scored just 14 points on 5-of-19 shooting.

“It shows us the work necessary to get over the hump,” Knicks coach Tom Thibodeau said.