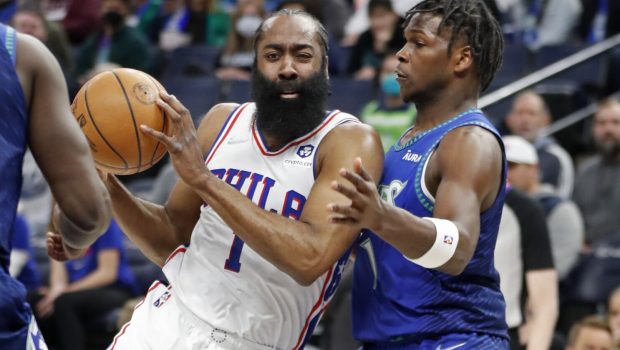 SIXERS HARDEN DEBUT: THEY WON AND BEAT THE SPREAD BY 28 1/2!

In what had to be the most anticipated Sixers debut since Wilt Chamberlain’s in 1965, James Harden had his coming out party last night in Minneapolis.

And he didn’t disappoint:

Joel Embiid added 34 points and 10 rebounds and the Sixers routed the Minnesota Timberwolves 133-102.

“We’re unselfish, we just want to win,” Harden said. “We’ve got guys, from top to bottom, that it feels that way on the court. Great things are going to happen more times than not. My job is to come in and add to each individual on this team.”

The wait proved worth it after Harden missed his first two games with the 76ers following the trade from Brooklyn with a hamstring injury. The results were promising, particularly where Embiid and Harden thrive — at the free-throw line.

“That’s what I expected,” said Embiid, smiling wide as the two shared a postgame press conference table. “I’ve never been wide open like this in my life. Seriously, the passing, like I wasn’t even expecting it and it was just coming.”

Karl-Anthony Towns led Minnesota with 25 points, and D’Angelo Russell had 21. But the Timberwolves couldn’t replicate the dramatic win in Philadelphia earlier this season.

“The most costly thing tonight, and it might not be on the stat sheet, was that we were looking for shortcuts all night long,” Minnesota coach Chris Finch said. “We come down, one pass, try to make a home run play on offense. And more than anything it was our offense that let us down, really.”

The 76ers didn’t have Harden — or Ben Simmons, who was traded to Brooklyn along with Seth Curry, Andre Drummond and two first-round draft picks for Harden — in November.

Harden, the 2018 MVP, hadn’t played since Feb. 2 due to the injury, delaying his pairing with Embiid. Philadelphia believes it finally has the top-level duo, and a strong third piece in Tobias Harris, to break through in the Eastern Conference.

The 76ers have won four of five.

In Philadelphia’s first game following the All-Star break, Embiid controlled the first quarter from the line. He was 7-of-8 shooting on free throws and had 10 points and six rebounds in the quarter.

Minnesota, coming off a 119-114 win over Memphis a night earlier, got to 51-48 late in the second quarter. But Philadelphia closed the half on a 15-1 run after Mattisse Thybulle had a putback dunk right before the buzzer off a missed 3-pointer from Harris.

“I feel the way we lost tonight, I feel like we took steps backwards,” Russell said. “Tonight, we didn’t lose right.”

Harden was asked after the game why he maybe gets a reputation as a bad teammate.

“I don’t know why,” Harden said. “That’s for the media. The media say that. I feel like I’m one of the best teammates that the NBA’s seen, on the court and off the court.”

Several 76ers, including coach Doc Rivers have talked about Harden’s high level of communication since coming to Philadelphia. Harden downplayed the situation regarding the trade.