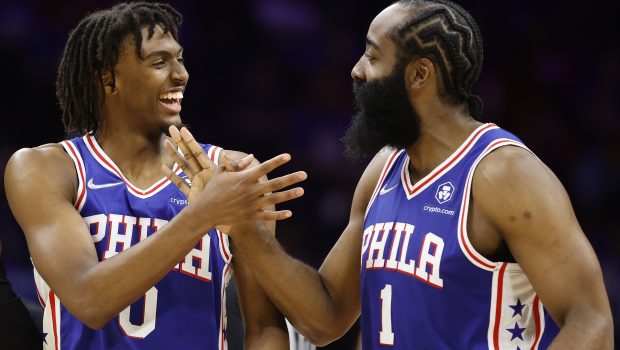 SIXER HARDEN A GREAT TEAMMATE! NETS DURANT, KYRIE NOT SO MUCH

Kevin Durant and Kyrie Irving both want out of Brooklyn.

And their former Nets teammate James Harden is not only happy in Philly but he cut a discounted deal that has allowed the Sixers the cap flexibility to add PJ Tucker, Danuel House and De’Anthony Melton.

So, who is the better teammate?

And when will the national lemming media give him that credit?

Harden had a $47.4 million option for this coming season that he declined last month, and worked with the 76ers to agree on a two-year deal that will pay him $33 million this season and $35 million more if he picks up his option for the 2023-24 season, according to a person who spoke to the Associated Press. Harden agreeing to give himself what amounts to a 30% pay cut for this coming season gave Philadelphia some salary cap flexibility that the team has already used to sign power forward P.J. Tucker and small forward Danuel House.

A former MVP (but never a champion) who led the league in scoring for three straight seasons during his time with the Rockets, Harden took a major step back last season following his trade to the Sixers and was a non-factor down the stretch as Philly fell to the Miami Heat in the second round of the playoffs. “Obviously, since we got him, everybody expected the Houston James Harden, but that’s not who he is anymore,” Philadelphia cornerstone Joel Embiid said following the team’s loss to the Heat.

Embiid may have been right about Harden — who averaged 21.0 points, 10.5 assists and 7.1 rebounds during his 21 regular-season games with the Sixers but saw those numbers dip to 18.6 points, 8.6 assists and 5.7 rebounds during his 12 playoff contests — as he actually turned down the opportunity to become one of the highest-paid players in pro basketball in order to let his team build around him.

Believed to be selfish and confirmed to play worse in cities with good strip clubs, Harden will be 33 by the time next season starts and the 76ers, his third team in three seasons, might be his best chance to win a title in a career that is certainly closer to its ending than beginning.

Maybe he realizes that and that’s why he agreed to take less in order for the team to do more. If Harden, along with Durant and Irving, had already done that, he might already have a championship ring.