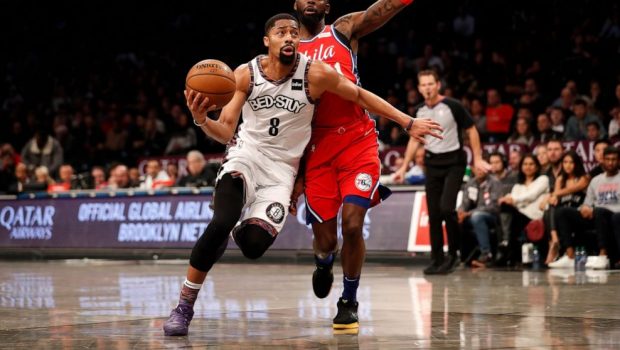 SIXERS HAD NO JOJO AND NO SHOT: NETS END 5-GAME WIN STREAK!

Spencer Dinwiddie had 24 points and six assists, while Joe Harris added 16 and Garrett Temple 13. DeAndre Jordan recorded a double-double of 13 points and 11 rebounds as the Nets move to 14-12 on the season and 10-5 without Kyrie Irving.

The 76ers were without Joel Embiid, who was sidelined with an upper respiratory infection and the Nets made them pay inside, outscoring them in the paint 64-54 and outrebounding them 52-38.

The Nets, who were on the second night of a back-to-back, raced out to a 16-point lead midway through the second quarter before taking a 57-43 half-time lead, thanks to some aggressive play from Dinwiddie as well as David Nwaba and Timothe Luwawu-Cabarrot off the bench.

Dinwiddie found Jarrett Allen for an alley-oop jam to cap off a 10-0 run to extend the lead to 18 points late in the period.

Brooklyn attempted a season-low 24 three-pointers on the night as they continued to attack the 76ers inside, with Dinwiddie and co. going at Al Horford in the pick-and-roll.

It was an off night for Horford, who returned from a two-game absence as he struggled on both ends. He finished with 10 points, nine rebounds and five assists, shooting 5-of-15 from the field and 0-of-6 from beyond the arc.

The 76ers couldn’t buy a bucket from deep, going 5-of-26 from the three-point line with Josh Richardson (0-of-4) and Tobias Harris (0-of-3) missing all of their three-point attempts.

Philly are now 3-3 without Embiid this season.

Ben Simmons led the 76ers with 20 points and five rebounds, while Tobias Harris added 17 points and Richardson 11, but the Nets’ depth proved too strong, with the second unit outscoring the 76ers’ bench 40-23 on the night.

Philly’s 89 points were the least the Nets have allowed in a game this season, with head coach Kenny Atkinson describing their display as “one of our best defensive performances since I’ve been here.”