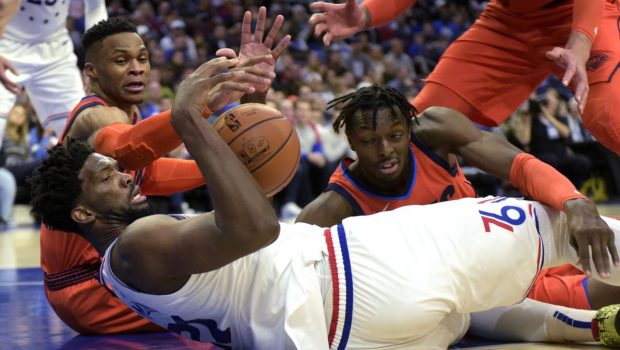 SIXERS’ GUT-WRENCHING LOSS TO THUNDER WAS A TEACHING MOMENT?

“It just shows that we stick with it no matter what,” Sixers Jimmy Butler said about the near-miss against the Thunder. “Lots of things to learn from on both ends of the floor in any and every situation, especially late game. I wouldn’t say we’d rather because nobody wants to lose, but better now than when the playoffs roll around. I think everybody’s heads are still high. We learned.”

Let’s hope that Jimmy Butler is right and the Sixers learned a lot from their gut-wrenching loss over the weekend.

Because they host the Houston Rockets tonight after Paul George converted a four-point play with 5.1 seconds remaining to lift the Thunder over the Sixers 117-115.

Joel Embiid led the way with 31 points, eight rebounds and six assists while Ben Simmons had 20 points, 15 rebounds and nine assists. Despite the solid statistics, the Sixers weren’t able to convert on their last possession with Simmons looking to be confused after handing the ball to Jimmy Butler beyond the 3-point arc.

“I’m backing Ben Simmons on the fly,” Sixers head coach Brett Brown said. “I wish we got it out of bounds quicker to create more of an environment that was moving and a little bit more disorganized, but there’s a lot of stuff that went on before that.”

Butler had already made two game-winning shots since joining the Sixers. And he wasn’t shy in attempting the third in the difficult loss.

The Rockets, meanwhile, rallied from 21 points down to stun the visiting Los Angeles Lakers 108-104 in overtime on Saturday night.

Harden as usual led the way with 48 points and Eric Gordon contributed 30 huge points in the comeback victory. Gordon sent the game into overtime with a clutch 3-pointer.

Harden continued his stellar play with his 19th straight game of at least 30 points. In 10 of the last 13 games, Harden has scored at least 40 points.

The most important fact this time was that the Rockets were able to win their 26th game.

“Words don’t do it,” Rockets head coach Mike D’Antoni told reporters. “That was just our guys showing a lot of heart.”

Harden also had eight rebounds, six assists and four steals. It was Gordon’s return from a sore knee that also catapulted the Rockets. After missing eight games, this was Gordon’s second game back in the lineup.

“He’s so offensively gifted and talented being able to shoot the basketball, being able to get to the rim, being able to make plays for others,” Harden told reporters. “You get a guy like that on the floor with you, it makes it easier not only for myself, but for everybody.”

The Rockets and Sixers split the season series last season. The Rockets also are looking to avoid losing back-to-back games to Philadelphia since Jan. 12-Nov. 13, 2013.