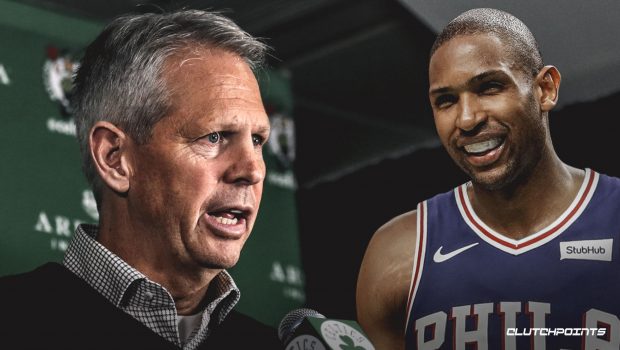 SIXERS GOT HORFORD TO PLAY THE 4, AINGE FINALLY REALIZES!

On the Sixers, Al Horford will be paired with star center Joel Embiid, whereas on the Celtics he was forced to play center.

Danny Ainge to @Toucherandrich on Al Horford picking the Sixers:

“I think that Al really likes to play the 4 more than the 5. He likes playing with Aron Baynes. He didn’t mind playing some 5 but I think…going to Philadelphia will allow him to be almost exclusively the 4.”

Horford signed a four-year, $109 million contract with the Sixers. Horford and Embiid form a lethal defensive and offensive duo in Philly. For the past few years, Horford has defended Embiid really tough when the Sixers and Celtics have played, so fans in Philadelphia are thrilled Horford is on their side now.

This past season with the Celtics, Horford averaged 13.6 points, 6.7 rebounds and 4.2 assists while shooting 53.5 percent from the field, 36.0 percent from beyond the arc and 82.1 percent from the free-throw line. Many believe the Sixers are now title contenders with Horford in the fold next to Embiid, Ben Simmons and Tobias Harris. Horford says the Sixers’ identity in 2019-20 is going to be on defense and wrecking havoc on that end of the floor.