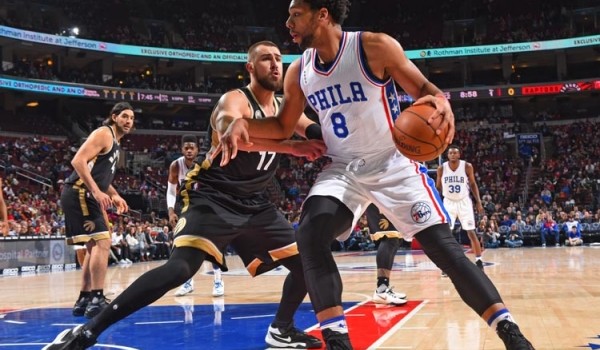 SIXERS: FROM WHITE HOT TO STONE COLD IN 108-95 LOSS TO RAPTORS

For those of you who think the Sixers are better with rookie center Jahlil Okafor (above) coming off the bench:

Last night’s 108-95 loss to Toronto at the Wells ends that debate.

Scoring the first 12 points of the game, the Sixers looked ready to knock of their Atlantic Division rival. Toronto, though, found its stride with a 32-point second quarter for its 11th win in a row over the Sixers.

Jahlil Okafor was a major factor in getting the Sixers going in the opening period. He poured in 10 of his 19 points in his first nine minutes of action, and also grabbed four boards during that stretch.

Ish Smith did the same in the third. With the Sixers trailing by 13 points, the sixth-year point guard stepped up, and pieced together a sequence in which he generated nine straight points for the team. In all, he dropped 18 points in the third quarter alone, and finished with a career-best 28 points. That total matches Robert Covington’s output from the Sixers’ November 27th game in Houston for the club’s top scoring performance of the season.

While the Sixers enjoyed an efficient performance from the perimeter, connecting on 11 of their 17 three-point attempts, the Raptors established a critical advantage from the free throw line. The visitors outdid their hosts by 15 made foul shots.