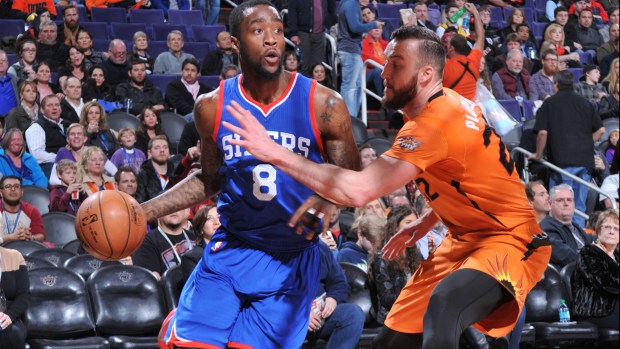 SIXERS GO DOWN FIGHTING IN THE DESERT, LOSE TO SUNS 112-96

Yes, it was another loss to a better team.

Sixers fans are used to that by now.

But the Phoenix Suns’ 112-96 victory over Philly on Friday night was not a typical blowout, as the score might indicate.

Tony Wroten (photo above) scored 28 points for the Sixers, who trailed 80-79 with a minute left in the third quarter. But a poor final period sent them to their 27th loss in 31 games.

“I was very happy with our effort,” Sixers coach Brett Brown said.

Gerald Green and Markieff Morris each scored 21 points and the Suns pulled away. “It just took them a little while,” Suns coach Jeff Hornacek said. “They kind of got on themselves at halftime and said, `OK, let’s go.”‘

With the Suns finally in control late, it allowed for an NBA first when Markieff and Marcus Morris played with teammates Goran and Zoran Dragic for the Suns. It was the first time two sets of brothers played for a team at the same time.

Zoran Dragic scored his first NBA points, completing a three-point play off an assist from his brother.

“We had that feeling we had when we played together for the (Slovenian) national team,” Goran Dragic said. “It’s always nice to have him on the floor and share the jersey.”

Outside of Alex Len’s career-high six blocks, the Suns played lackluster defense for much of the night to allow the NBA’s worst offensive team to stay close.

The Sixers sported their 15th starting lineup combination, with Luc Mbah a Moute back at center after missing two games with a strained left calf and K.J. McDaniels at shooting guard.

It was the second start for the rookie McDaniels, as Brown said he wanted to “try something” after rookie Jakarr Sampson had started the past five games in place of the sick Hollis Thompson.

An energized Mbah a Moute set the tone early with seven points and four rebounds in the first 4 minutes. And the Sixers’ easy path to the hoop continued late in the first half when Wroten scored on consecutive drives to help erase a 10-point deficit and put Philly ahead 59-57 at halftime.

The Suns built an 80-68 lead on consecutive alley-oop dunks by Green and Miles Plumlee from feeds by Bledsoe. But the Sixers responded with an 11-0 run.

Two nights after an overtime loss in Oklahoma City, the Suns led by 16 points in the fourth quarter to improve to 8-7 at home and remain eighth in the West.

“We were getting to the basket and we did hit some shots,” Sixers guard Michael Carter-Williams said. “They made some adjustments in the second half and those adjustments helped them win the game.”