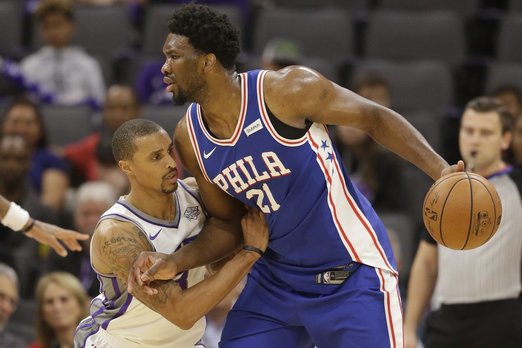 The formerly streaking Sixers gave away a game last night in Sacramento.

De’Aaron Fox hit a 19-foot jumper with 13.4 seconds left to lift the Kings over the Sixers 109-108, ending a five-game winning streak for the 76ers that marked their longest in six years.

Willie Cauley-Stein’s block on Joel Embiid set it up. The Kings’ 7-footer also defended Embiid when he missed a shot from the free throw line as time expired.

Embiid had 22 points and 15 rebounds on an uneven night. He shot 7 of 20 and struggled in the paint against Randolph and Kosta Koufos.

“We didn’t deserve to win the game,” 76ers coach Brett Brown said. “We poked ourselves in the eye. There are some things that you can spin and blame on youth. This isn’t one of them.”

The 76ers trailed by as many as nine and looked out of rhythm most of the night before Simmons scored six straight points in the fourth quarter, including an emphatic, one-handed, driving dunk down the lane.

Dario Saric followed with a 3 and Covington’s sixth shot from beyond the arc followed by a three-point play extended the lead to 108-102 before the Kings made their decisive push.

The game was close early on before Sacramento pulled away midway through the second quarter to lead 64-57 at halftime.

The Kings led for most of the second half but fell behind late in the fourth quarter when they went nearly four minutes without a field goal. Fox ended the drought with a short jumper and Garrett Temple hit a 3-pointer before Fox’s game-winner gave Sacramento its second consecutive win.