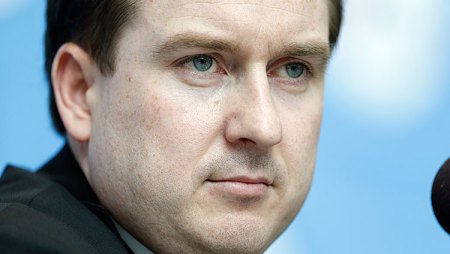 ‘SIXERS GETTING THAT LAKERS PICK IS AN ACT OF EVIL GENIUS’

Finally for today, we bring you the clever, incisive opinion of Sam Hinkie’s Super Thursday, as described by Grantland.com’s Andrew Sharp:

Parsing the logic of what Sam Hinkie (photo above) and the Sixers are doing requires a longer conversation than a blurb in a quick winners-and-losers column. But within the framework of what the Sixers are doing, Thursday was a massive win. They got rid of Michael Carter-Williams — a player who wasn’t as good as his reputation — and in return they brought back what should turn into an excellent Lakers lottery pick either this year or next year.

It’s funny, because we just lived through a month of Sixers cult members lashing out at everyone for mocking the 12-41 Sixers. “Do you even watch this team? Update your jokes, bro, the team is fun this year!” And apparently that was too good for Hinkie! Things are looking up? Time to gut the team one more time.

The criticisms write themselves. The problem with the criticisms is that MCW wasn’t actually good. Long term, it didn’t make sense to invest in him as the centerpiece of the offense. Flipping him for anything would have been reasonable, but getting that Lakers pick back is an act of evil genius. And now they’re well positioned to get tankeriffic down the stretch and land another top-three pick of their own.

If you can’t stand what the Sixers are doing and want them to fail, that’s reasonable. But if you want the Sixers to fail, Thursday was not a good day.