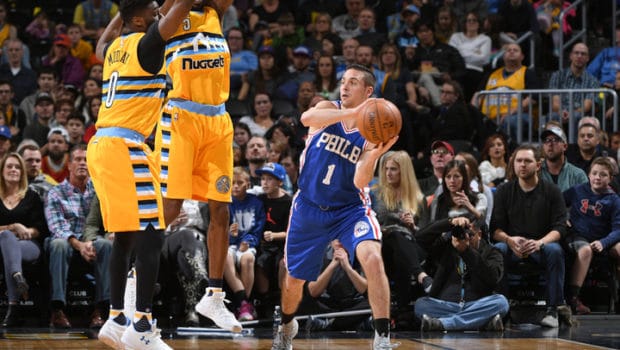 The Nuggets pulled within 114-113 with 1:43 left, but T.J. McConnell (above) hit his third 3-pointer of the night — matching his total makes for the season. He finished with 17 points and eight assists.

The Sixers are learning to be closers.

Ersan Ilyasova had a career-high 23 points and 13 rebounds and the Sixers survived a flurry in the final seconds to beat the Denver Nuggets 124-122 last night.

“I feel like the trip has been rewarded with a win and us having the ability to finally close out a game and finish off the fourth period,” Philly coach Brett Brown said.

Joel Embiid returned after sitting out Thursday’s loss in Utah to score 23 points and hit key free throws down the stretch. The Sixers ended their four-game trip with just their third win away from home despite having just nine available players.

They had a chance to win the other three games on this trip but consistently faltered in the fourth quarter. The Jazz outscored them 30-9 to end Thursday’s game, and the Sixers went over the tape of the period Friday morning.

“Tonight, that was the emphasis at the end of the third quarter, that’s what everybody was talking about,” Embiid said. “We focused, we locked in and got the win.”

Nikola Jokic had a game-high 25 points for the Nuggets, and Emmanuel Mudiay scored 22. Denver had won four of its last five home games but a bad start led to another defeat.

The Nuggets had a chance to tie it during a frantic ending. After Embiid hit two free throws to put the Sixers up four, Jokic was fouled on a 3-point attempt.

Jokic made the first two free throws and intentionally missed the third. Denver’s Gary Harris grabbed the rebound but missed a short bank shot, andKenneth Faried’s tip-in try was off as time expired.

“Jokic did a great job missing, I got a shot up and we had a chance for a tip-in, but it just didn’t go our way,” Harris said.

Four straight foul shots by Denver tied it, but Embiid split a pair of free throws to put Philadelphia ahead by one.

He then stripped Jokic on the other end as the center went up for a go-ahead layup and drained two more free throws to put the Sixers ahead 120-117 with 15.9 seconds left.