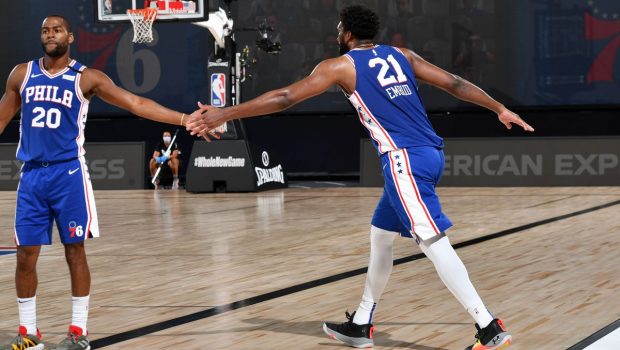 SIXERS GET SERIOUS JUST IN TIME TO BEAT MAGIC!

Like magic, the Sixers defense made an appearance in the fourth quarter.

And that made the difference in a 108-101 win over the Orlando Magic.

Tobias Harris had 23 points and 15 rebounds, Joel Embiid stepped up his game in the second half and finished with 23 points and 13 rebounds as the Sixers won in their first game without All-Star Ben Simmons.

Simmons is out indefinitely after injuring his knee Wednesday night.

Alec Burks had 22 points off the bench and five-time NBA All-Star Al Horford stepped into the starting lineup and finished with 21 points and nine rebounds for the 76ers, who improved to 3-1 since the restart.

But Embiid’s 16-point second half was a key for the 76ers.

“In the second half, he just didn’t care what was going on, what they were throwing at him,” Horford said. “He was just going to dominate and be assertive. And when he has that mindset, all I can say is, ‘Good luck.'”

Embiid was particularly effective inside the paint where he was 7 of 10 from the field. He was 0 for 8 from outside the lane.

That drew some criticism at halftime from NBA analyst Charles Barkley.

“You are unguardable,” Barkley said of Embiid. “Every time you take a jump shot you bail the defense out. … Do you want to be an All-Star or a superstar?”

Horford was pretty good too for the 76ers.

“There is an emerging Al Horford,” coach Brett Brown said. “… There is a physical presence that we needed.”

Evan Fournier had 22 points and Nikola Vucevic had 21 points and 12 rebounds to lead the Magic, which have lost three straight games in the NBA bubble after starting 2-0.

The Magic played without Aaron Gordon. who left Wednesday’s game against the Raptors with tightness in his hamstring following a hard foul by Kyle Lowry.

The 76ers led 88-86 midway through the fourth quarter when Horford knocked down a 3 from the left wing to ignite a 11-4 run to create some breathing room. Embiid capped the mini-explosion with a two-dribble move from the right wing where he maneuvered under the basket and around Vucevic and skied for a powerful reverse dunk. He then celebrated with his hands outstretched as he back-peddled down the court.

The Magic led most of the game, but struggled to make shots in the fourth quarter and let up too many offensive rebounds.

“It’s frustrating because we led all the way through the third quarter and played really well, but it is difficult when you keep giving up second chance points,” Vucevic said. “We just couldn’t finish.”

“We let them punk us on the glass and then we were doing great on Embiid then we made three straight mistakes that got him going,” Clifford said.

He called his team’s reach-in fouls that put the 76ers in the bonus “stupid and undisciplined.”