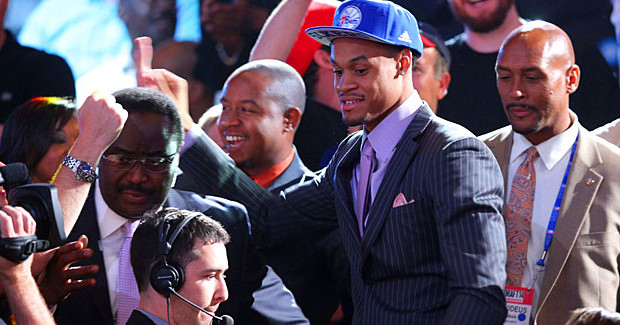 SIXERS GET PROPS FOR THEIR OFF-SEASON PERFORMANCE

So, NBA.com’s David Aldridge has rated all 30 NBA teams on the basis of their off-season performance, and he has found the Sixers at 11th best.

Now, Angelo Cataldi and his like may disagree but FASTPHILLYSPORTS.COM respects Aldridge’s experience and judgment, so Angelo will just have to suck it up since he sucks so much.

THE KEY MAN: Alfred C. Koeppe, Chair, New Jersey Economic Development Authority. On Chairman Koeppe’s watch, the New Jersey EDA approved a plan for a new practice facility for the Sixers in Camden, just across the river in New Jersey from Philly, that is scheduled to be ready in June, 2016. Why, yes, that is just before the NBA free agent period will begin that year — when the likes of LeBron and Durant and Joakim Noah and Al Horford and several other big-time players will be available. A team’s practice facility is rapidly replacing posh locker rooms as a key selling point for prospective free agents. The Sixers’ current facility at a medical center is, um, spartan.

THE SKINNY: No, we’re not crazy. The 76ers get props here because they’re sticking to the plan — acquiring as much high-upside talent as possible.

I’m not tone deaf to the idea that Philly’s transparency in not caring in the least about its short-term record is tough for its fans to support at the box office.

I’m not immune to the idea that such obvious tanking makes the need to look at tweaking the lottery before next May imperative. But teams too often walk away from what they say they’re going to do in order to save their own skins. General manager Sam Hinkie has, so far, not walked away from the goal he’s set, and owner Josh Harris, so far, has had his back.

The Sixers took a reasoned gamble that Embiid can play with the back issues that plagued him during his one college season; if so, they have the player with the most upside in the draft. Saric is viewed by many as the top player in Europe. It will take a year or two for him to come over, but when he does, it will be to Philly (and Hinkie got a future first from Orlando in the process). McDaniels was ridiculously good value in the second round. But in the meantime, it would not hurt for the Sixers to reduce some of their current ticket prices in a big, meaningful way.