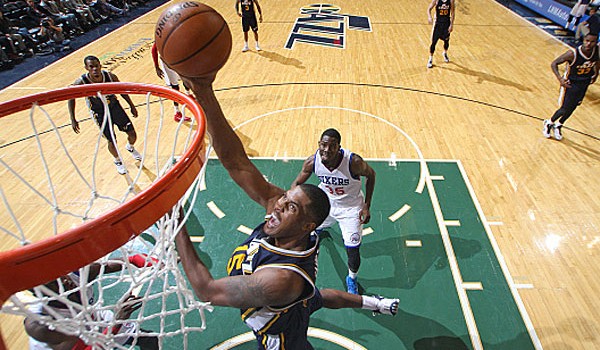 The Sixers had a chance to be bold and pick a player of the future with the No. 2 selection in the 2010 NBA draft.

Instead, they chose safely: the overrated Evan Turner, who wasn’t a bust but wasn’t a star and is now putting up empty stats for the Celtics.

Two bigs were available: DeMarcus Cousins, who rang up 39 points and 11 rebounds as Sacramanto beat the Knicks last night, and Derrick Favors.

Favors (photo above) had 17 points, 15 rebounds and five blocked shots to lead the Utah Jazz to an 88-71 victory over the Sixers on Saturday night.

Trey Burke added 17 points, Gordon Hayward chipped in 15 and Enes Kanter finished with 10 points and 10 rebounds for the Jazz (10-20). Tony Wroten scored 20 points and Robert Covington added 17 for the Sixers (4-25), who could not overcome a sluggish offensive performance before halftime.

The Jazz limited the Sixers to just 12-of-40 shooting (30 percent) from the field before halftime. Michael Carter-Williams particularly struggled, shooting just 1 of 13 in the first two quarters. He finished the game just 2 of 20.

Favors helped Utah get off to a quick start. He blocked three shots in the first 5 minutes and added three baskets, culminating in a dunk that gave the Jazz a 12-5 lead. Utah pushed its advantage to 23-10 late in the first quarter when Hayward made a pair of baskets and a pair of free throws on three straight possessions.

It didn’t get much better for the 76ers during the second quarter. Philadelphia cut its deficit to 32-25 after Wroten drove for a short jumper and then, on the ensuing possession, stole the ball and fed it to Henry Sims for a quick basket.

The Jazz regained a double-digit lead, going up 40-28 when Favors stole the ball and fed Burke for a basket and then followed with a dunk on Utah’s next possession.

After taking a 44-32 halftime lead, the Jazz let it slip away during a sluggish third quarter start. Utah missed 11 straight shots to open the period. The Sixers wasted no time taking advantage of the prolonged drought – opening the half with a 15-2 spurt.

Covington fueled the run with a pair of 3-pointers and then Wroten tied the game with a driving layup. The Sixers finally took a 47-46 lead on a free throw from Jerami Grant with 6:21 left in the quarter.

Utah trailed only briefly. The Jazz scored six unanswered points to go back in front 53-47.

Philly cut it to 60-59 on a basket from JaKarr Sampson early in the fourth quarter. The Jazz kept the Sixers at arm’s length. Burke converted a 3-point play a minute later to keep Utah from falling behind.

Utah did not finally start to pull away until Favors converted a three-point play and drove for a dunk to push the Jazz lead to 74-66 with 4:52 remaining. That touched off an 18-3 run to seal it.