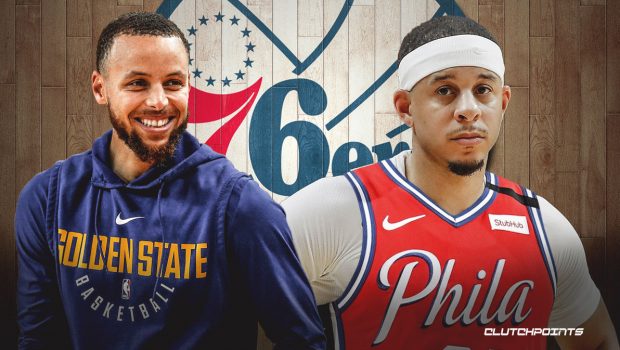 SIXERS GET AN ‘A’ ON SETH CURRY-FOR-JOSH RICHARDSON DEAL!

You can look at them being ninth in 3-point shooting percentage and say that’s preposterous, but their 3-point shooting didn’t really create the necessary space for guys like Joel Embiid and Ben Simmons. A lot of it came from Tobias Harris (legitimate scorer), Shake Milton (unproven guy), Furkan Korkmaz (good shooter but nobody who is going to terrify a defense), Alec Burks (not reliable) and Raul Neto (again, not someone who scares a defense). They took advantage of the opportunities they got but never actually shifted the defense with their outside shooting. That’s what a great shooter does.

Seth Curry (above right with his bro Steph) is a great shooter.

If you give him an inch of daylight, he burns you.

If you leave him for a second, you’re going to get called out in the film session the next day.

Curry creates real spacing on the floor for stars. We saw it with how he helped Luka Doncic and Kristaps Porzingis last season. We’ve seen him do it at every stop he’s been. He’s a career 44.3 percent 3-point shooter on more than 1,000 attempts. That’s the type of shooting that puts fear into an opponent’s game plan. That’s not to disrespect the guys who knocked down shots for the Sixers last season, but they didn’t have that same effect.

Daryl Morey is bringing in one of the best shooters in the league. It hurts to give up Josh Richardson because he’s a good role player, but Curry fits the Sixers’ dynamic on offense a lot better.

Curry has three years and roughly $25.5 million left on his deal.

That’s a great contract for Morey to have at his disposal, should he need to move it at some point.