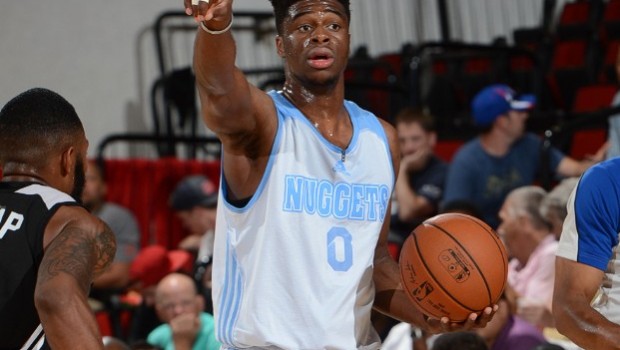 SIXERS GET A LOOK AT MYSTERIOUS MUDIAY TODAY AT THE WELLS

Remember last June when all the talk about the Sixers No. 3 pick in the draft centered around point guards?

Yes, D’Angelo Russell and Emanuel Mudiay were the focus.

Well, Russell got snatched by the Lakers at 2 and the Sixers took center Jahlil Okafor at 3.

Well, today we get a look at Mudiay as his Denver Nuggets visit the Sixers at the Wells.

Mudiay and the Sixers’ T.J. McConnell are the top rookies in the NBA in assists, though they entered the league in vastly different ways.

Mudiay is a native of Congo who played high school basketball in the United States and one season professionally in China before Denver (7-13) selected him with the No. 7 pick. He is averaging 6.1 assists while enduring growing pains as one of the league’s worst shooters at 31.0 percent.

McConnell was undrafted after spending two years apiece in college at Duquesne and Arizona. The guard, averaging 6.0 assists, started 13 games before coming off the bench for the last four.

Jahlil Okafor will complete his two-game, team-imposed suspension Wednesday after the release of a second video provided details of his fight in Boston he hadn’t revealed to the club. The center, averaging a team-high 17.2 points and 8.1 rebounds, sat out that night’s 99-87 loss at New York.

”Today we learned more and the thing I do say is when I spent time with Jahlil in his room today, he is ashamed, he’s embarrassed and this has caught him off guard,” coach Brett Brown said.

The 76ers (1-19) shot 37.2 percent without Okafor one night after their first win, 103-91 over the Los Angeles Lakers. Hollis Thompson scored 13 points as Philly never led and trailed by as many as 23 points

The 76ers recalled guards Tony Wroten and Kendall Marshall from the D-League on Friday. Wroten is expected to make his season debut while Marshall is still out after a torn ACL.