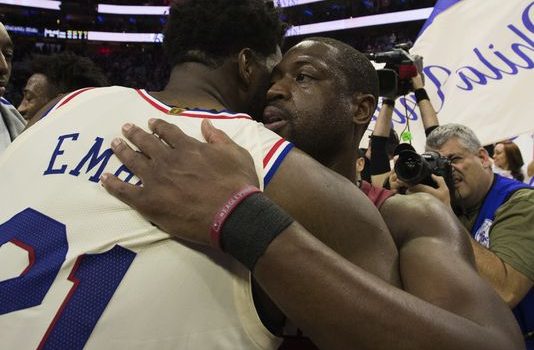 SIXERS ARE FUTURE (WHY NOT THE PRESENT?) OF NBA, D-WADE SAYS!

“You want to see nothing but good things for those guys,” Dwyane Wade said after his Heat were ousted in Game 5, 104-91. “This is the future of the NBA. The NBA is in great hands with Ben (Simmons) and Joel (Embiid) and those kind of individuals.”

Dwyane Wade may not play another game in the NBA, and his 36-year-old body may be tired and sore.

But after the Sixers beat his Heat last night, the future Hall-of-Famer with three NBA championship rings, was very clear:

Simmons, who Wade compared to “that guy in Cleveland” (LeBron James), and Embiid, who’s already one of the best two-way centers in the NBA, headline the Sixers’ young core that arguably has the most long-term potential of any team in the league.

“Sometimes, an organization, they get lucky and they get to draft someone special,” Wade said. “These guys got to draft more than one person special. And you’re able to build around that. That’s what these guys have the ability to do.